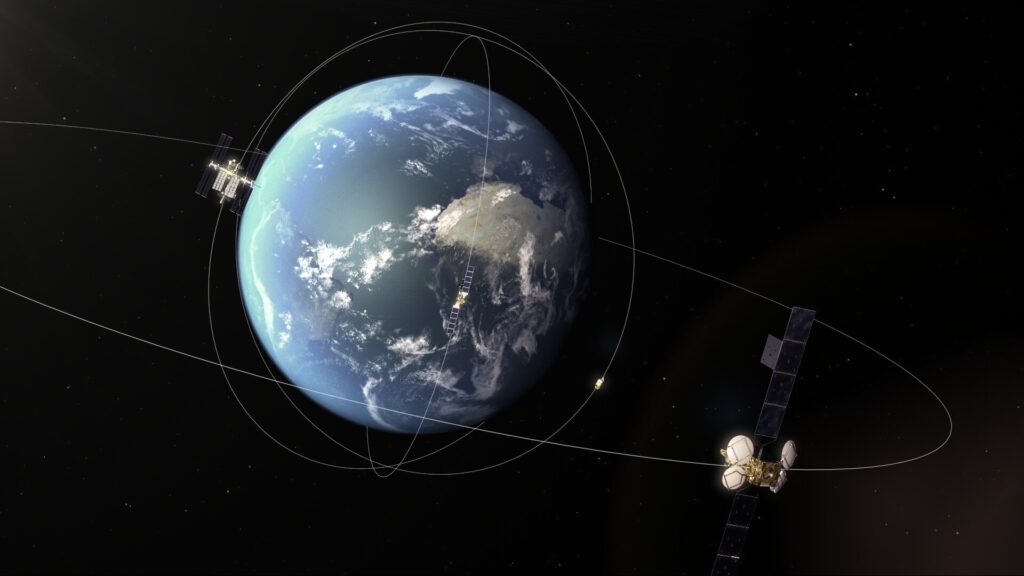 WASHINGTON: Last year was another good year for the space industry overall, with record launch numbers and a spurt in both broadband and remote sensing technology innovation, according to the Satellite Industry Association’s annual report.

While the COVID-19 pandemic has had some negative impact, especially on the satellite manufacturing sector, the industry has seen growing demand during the crisis for connectivity because of the huge increase in telecommuting by both the commercial and government workforces.

During 2019, the overall global space economy grew to $366 billion, up 1.7 percent over 2018, the 2020 State of the Satellite Industry report says. The commercial industry dominated the market, accounting for almost 75 percent of global space business. Commercial satellite industry revenue was $271 billion in 2019, a slight decrease of 1.5 percent from 2018. The US accounted for $114 billion, about 42 percent.

At the end of 2019, 2,460 active satellites were on orbit, most of them commercial — with 75 countries operating in space.

Contrast these overall statistics with those found in SIA’s 2010 report. A decade ago there were only 986 satellites on orbit, most of them government owned. The global space economy was worth $276.5 billion; and total satellite industry revenue was $168.1 billion. Further, “government launch demand remained the major revenue driver in 2010, accounting for 55% of all commercially-procured launch revenues.”

The SIA report attributed the slight dip in 2019 satellite industry revenue to “lower manufacturing and launch revenue.” Launch industry revenue was $4.9 billion, with the US accounting for 35 percent of that revenue ($1.7 billion). That total was a 21 percent drop from 2018 global revenue of $6.2 billion.

Out of 102 total launches in 2019 (some launch vehicles carry more than one satellite), 78 were carried out by commercial launch firms. Indeed, a record 386 “commercially procured” satellites — that is, those bought from commercial firms by commercial, government and military customers — were launched last year. This marks a 17 percent increase over 2018. According to the report, 2 percent of those 386 satellites represented sales to military customers of surveillance sats; another 3 percent by governments for civil/military communications.

The upshot reflected here is that while the pace of launch is up, the cost of launch — like the cost of manufacturing satellites — has gone down. SIA finds that there simply are more launch choices, including reusable vehicles such as SpaceX’s Falcon 9, which on June 30 launched the third GPS III satellite. Rideshares are another option that are popular for customers launching small satellites and tiny Cubesats.

The SIA report notes that tech innovations allowing faster throughput speeds and increased on-board data capacity contributed to a 19 percent growth from 2018 revenue for the broadband industry — that is, traditional satellite communications generally aboard satellites in Geosynchronous Orbit some 36,000 kilometers in altitude. 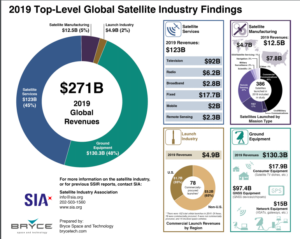 Likewise, new capabilities in optical, radar and radio-frequency mapping drove an impressive 11 percent increase in remote sensing revenues. Most, but not all, remote sensing satellites are in Low Earth Orbit (LEO), below 2,000 kilometers in altitude. The remote sensing boom includes many startup firms backed by venture capital, such as Capella Space — which recently became the first provider of synthetic aperture radar (SAR) data to the NGA under a June 25 announced Cooperative Research and Development Agreement (CRADA). Capella, as Breaking D readers know, also is being reviewed by the NRO as a future provider of SAR imagery, under a 2019 study contract.

LEO is also increasingly being eyed by new entries into the broadband business, such as SpaceX and Amazon in the US, who hope to provide global connectivity to underpin and expand the Internet of Things. SpaceX on June 13 launched its latest batch of Starlink satellites, bringing its Internet constellation to 538. It also launched three satellites for remote sensing firm Planet, in the first time a Falcon 9 carried another company’s satellite as a rideshare. 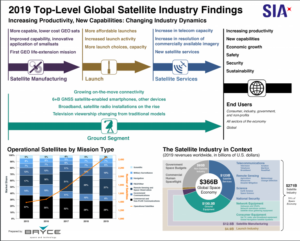 According to SIA, global satellite ground equipment revenues in 2019 also grew by a decent 4 percent over the previous year to just over $130 billion, “led in part by continued worldwide sales of global navigation satellite system (GNSS) terminals such as smartphones and tablets.”

Going forward, SIA is reasonably hopeful with regards to the affect of the COVID-19 pandemic on the satellite industry. This is because, according to the report, the space industry has been “generally deemed essential by governments.” Thus, it finds, most companies are “maintaining operations.” The report further notes that the satellite industry has been labelled as “critical infrastructure” by the Department of Homeland Security.

By way of example, the Space and Missile Systems Center (SMC) announced on June 18 that six space launch companies had been granted contacts using Defense Production Act funds: Aevum, Astra, X-Bow, Rocket Lab, Space Vector and VOX Space. Each of the firms won a contract to launch two rideshare missions for government customers over the next two years.

SIA further finds that, thanks to the pandemic, broadband demand is increasing; and “unique satellite capabilities” are “contributing to pandemic management, insight.” This includes increased demand for “pandemic-related imagery, geospatial data, analysis of satellite data.”

That said, SIA finds that there have been affects on company operations, especially on manufacturing, from social distancing requirements, struggles with keeping distribution networks running and the health of the supply chain. Further, the report expressing concern that “reported double digit aircraft manufacturing revenue drops” during the first quarter of 202 “may have ripple effect on space divisions within those firms.”