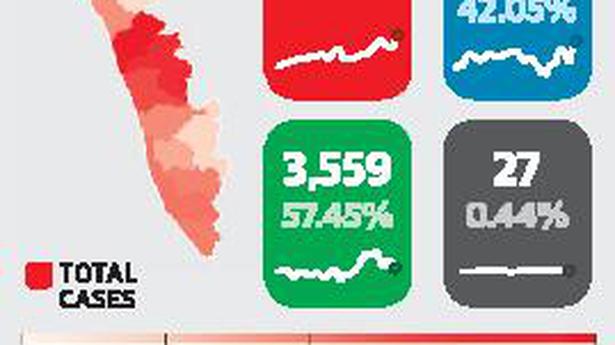 The cumulative burden of COVID-19 cases has crossed the 6,000 mark in the State, the jump by 1,000 cases occurring in the last four days. With 301 cases reported on Wednesday, the total case tally now stands at 6,195.

What has marked the progress of the epidemic in the past one week is the exponential increase in the proportion of cases that have been springing up through local transmission.

On Wednesday, the number of cases of local transmission was 107, with imported cases of infection numbering 194. Alarmingly, 60 out of the 107 “contact” cases or cases in the community have been reported in the capital district, where the disease has been spreading widely among fishers at Poonthura.

Thiruvananthapuram also accounted for the maximum number of new cases reported on Wednesday with 64 cases, of which 60 are cases that have occurred through contact with asymptomatic infective persons. A chunk of these cases have been reported in Poonthura and the neighbouring coastal villages which are densely populated by fishers.

While it is speculated that Poonthura could be an isolated super spreader event, public health experts pointed out that the situation would be no different across the entire coastal line of the State and that only intensive testing in the local community would reveal the extent of actual disease transmission.

Those who contracted cases from the community include three health-care workers, nine jawans of the Border Security Force in Thrissur, a Central Industrial Security Force jawan, a member of the Defence Security Corps in Kannur and three personnel of the Indo-Tibetan Border Police.

The number of persons currently in quarantine and under surveillance is 1,85,546, of whom 3,137 with mild symptoms have been isolated in hospitals in various districts.

Malappuram, with 389 patients, has the maximum number of patients. This is followed by Kannur (324) and Thiruvananthapuram (238).

The State has been aiming to increase testing to 15,000 samples a day and in the last 24 hours, the samples tested touched 11,250.

With 12 new regions being newly designated as hotspots and four others dropped from the list, the total number of hotspots now is 169.

Meanwhile, in Kasaragod, the test result of a 48-year-old man who was brought dead to the hospital turned positive on Wednesday.

The man, a native of Kottakkunnu in Mogral Puthur panchayat, was living at Hubli in Karnataka. He was brought to the Kasaragod General Hospital after his health condition deteriorated on Tuesday. However, doctors declared him brought dead, said District Surveillance Officer A.T. Manoj.

According to his relatives, the patient had a history of cardiac problems.

One death in Kollam

In another case in Kollam, a 65-year-old patient from Kayamkulam who was undergoing treatment at the Government Medical College Hospital here died on Wednesday.

He was admitted on June 28 after he tested positive for SARS-CoV-2. However, his swab collected on July 6 had tested negative.

He was being treated for cardiac arrest, stroke and renal problems at the hospital.

These two death cases have not been included in the official figures.