800 metres: Finally a figure on what Chinese Army claims in Galwan 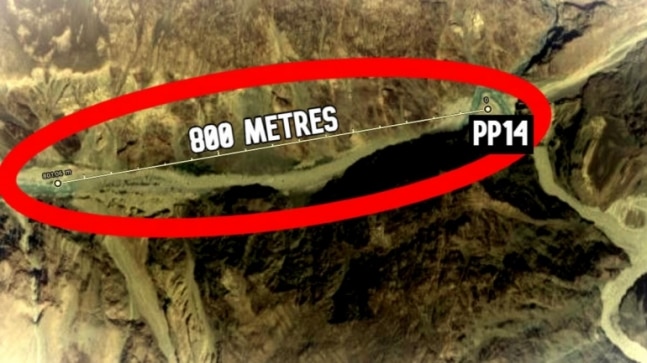 As Indian and Chinese Army positions pulled back nominally this weekend from the Galwan Valley’s blood-soaked Patrol Point 14 to create a ‘no man’s land’ buffer zone, clarity has emerged of just how much of the narrow river valley China has officially claimed during the current standoff. In excerpts from minutes of one of the meetings between the two sides, India Today can now confirm that China has been explicitly staking claim to territory up to 800 metres into the Indian side from Patrol Point 14.

Amidst larger claims over the ‘entire’ Galwan Valley by the Chinese Foreign Ministry, the 800-metre claim was articulated first at a battalion-level meeting in April this year after India began construction of a bridge near the confluence of the Galwan and Shyok rivers. The figure also provides a measurable backdrop to the events that have followed, described in India Today’s most detailed account of the June 15 bloodshed.

The limited disengagement visible in the Galwan Valley is not being seen as a milestone by any stretch, nor a reason for the Indian Army to tactically exhale. The Army is sharply aware of history that played out in this very sector over 61 years ago.

In 1959, India and China had mutually agreed to the area until Patrol Point 14, with very little patrolling and not a single face-off for years. What the Chinese have begun articulating as their claim since April this year is 800 metres from what was agreed upon 61 years ago.

In the context of the limited disengagement at Galwan, a newspaper banner headline from 1962 has gone viral on social media. The screaming headline says ‘Chinese Troops Withdraw From Galwan Post’, with a strap line claiming that ‘DELHI WARNING HAS TELLING EFFECT’. If nothing else, it has come to serve as a visible caution against any celebration of an ongoing de-escalation, especially when it comes to a country with the established strategic duplicity of the People’s Republic.

91 days after the banner headline, the 1962 war broke out, and the Galwan Valley, among much else, was overrun by Chinese troops. The India of 2020 is vastly different, and that’s perhaps why despite a lengthy statement from the External Affairs Ministry threads being linked to the efforts of an active diplomatic ‘back channel’, the Army, if anything, has heightened its guard.

While the media gaze has remained largely fixed on the Ladakh sector, the Army’s unwillingness to see the ‘disengagement’ steps as anything substantive yet is also borne out from Chinese activities elsewhere. Repeated collisions with the Indian Army in north Sikkim, particularly Naku La across May and June point to a concerted effort to disregard agreements and established protocols, and ‘create facts on the ground’.

The Nepal friction is only the latest, and particularly emotive, manifestation of China’s highly organised provocation machinery.

As India Today understands it, this is one of the key reasons why, in the absence of more sustained disengagement and verifications, the Army regards token actions as ‘four steps forward, two steps back’. That, incidentally, is precisely how the Army is seeing the Pangong Tso situation play out.

While a small number of Chinese positions have withdrawn from the Finger 4 ridgeline, the fact that a ‘pullback’ could be to Finger 5 still makes this a serious situation, but gives the Chinese the opportunity to claim they have de-escalated. In the Army’s appreciation, this is precisely what is meant by changing the status quo.

With India’s National Security Advisor Ajit Doval and the Chinese Foreign Minister speaking on the phone, and the government acknowledging the weekend engagement in its most lengthy statement on the standoff since it began two months ago, the next steps are crucial. In the foreseeable future are more meetings under the aegis of the Working Mechanism for Consultation and Coordination on India-China Border Affairs (WMCC) and between military officers on both sides.

But with the Army viewing the eastern Ladakh situation as nothing less than the long haul, there are already rumblings within the ranks of whether the current standoff will yield a new state of play on the China border, or simply a return to business as usual once Chinese deployments have returned to ‘satisfactory’ levels at the four friction points.

The 3.2-km wide buffer zone created at the Galwan Valley, straddling Patrol Point 14, may be a temporary measure, but is being regarded within the Army as a mechanism that should be looked at with seriousness as a key element in a broader set of measures. And that brings us to one of the key rumblings within the Army since the June 15 bloodshed.

India Today has learnt that in the last 3 weeks, while morale remains very high, lower cadres and young officers of the Army have openly raised the issue with their superiors over whether the Indian Army, a force trained for border defence at all costs, should be bogged down with the task of border management and attendant protocols.

An increasing number believe the foreseeable endgame to the current standoff in eastern Ladakh should at least be a situation where, in the absence of a larger solution to the border dispute, buffer zones are ‘managed’ by agencies like the Indo-Tibetan Border Police (ITBP) with the Army providing defence from depth. It remains to be seen whether the opinions of the younger cadres will filter up the chain and manifest in the policy considerations.

Most Army personnel manning border posts weren’t born the last time blood was spilled between India and China 45 years ago. The incident of 15 June 2020 at Galwan — and the first visible pullback yesterday — has therefore raised distinct questions in the minds of soldiers over why decades of diplomacy after Independence have failed to settle the border issue.

And most importantly, why there remains no real promise of any kind yet, that the events of May-June 2020 will not recur in Ladakh or beyond.