A German book and Reese Thomas’ pursuit of happiness 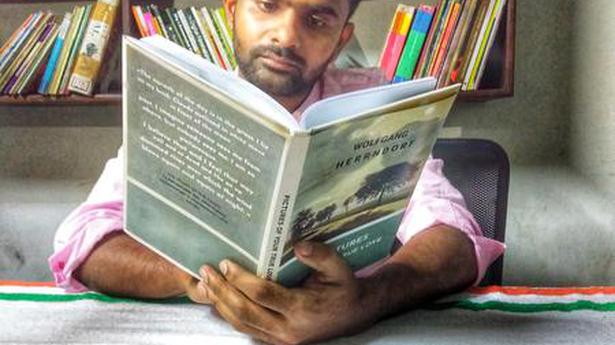 To what lengths would you go to read a book? Especially if it is in a foreign language and is hard to find? Most people would shrug and move on. Not Reese Thomas.

Fascinated by an elusive German novel, the 27 year-old from Muvattupuzha near Kochi, Kerala, first decided to learn the language. “I tried learning German online so that by the time I found a copy of the book I could perhaps either read it or translate it. A few days in, I realised there was no way I’d learn enough to read a book with ease so I gave up.”

Nevertheless, he continued his search. The book in question is Wolfgang Herrndorf’s, Bilder Deiner Groben Liebe: Ein Unvollendeter Roman (Pictures of Your True Love), an unfinished sequel to the bestseller Tschick (Why We Took the Car in English).

Tschick (2010) is a coming-of-age story of two 14 year-old boys and their adventures as they drive around Berlin in a stolen car.

Tschick, made into a film, was screened at the International Film Festival of Kerala (IFFK, 2016). Reese, who has assisted in films such as Kammattipadam, Carbon, Luca and the under-production Minnal Murali, saw the film adaptation and was deeply impressed.

“The protagonists — Maik and Tschick — meet a girl, Isa, and make a pact with her to meet 50 years later at the same spot. I couldn’t stop thinking about it, whether Isa and the guys meet or not. I wanted to know what happens,” says Reese.

The book’s cover, a replica of the original

The film, directed by Fatih Akin and released in 2016, got him curious enough to read the English translation of the book — Why We Took the Car — which he bought online. He learnt that the book had a sequel, and that Herrndorf died, at 48 in 2013, leaving Bilder Deiner Goben Liebe (published posthumously in 2014) incomplete. The book, however, had not been translated into English.

Tracking it down became his lockdown ‘project’. “Some people might find what I do crazy or think I am eccentric. But this makes me happy, things like this give me inner peace,” he says. In this unapologetic pursuit of happiness, Reese says he went to Mumbai, by train, in 2016, to watch Dilwale Dulhaniya Le Jayenge at the legendary Maratha Mandir movie hall, then on a train to return home the same day.

“I just wanted to see it… imagine a film being screened for close to 20 years in a theatre. I wanted to see the film there, for that reason,” he says.

The effort that he put into finding the book makes the trip to Mumbai a cakewalk in comparison.

Reese messaged the translator, Tim Mohr on Twitter and Fatih Akin enquiring if a translation was in the offing. Very soon he had his answer — that Bilder… would not be translated.

He was disappointed but not ready to quit.

Not wanting to read in PDF format, he continued looking for the book, “There is nothing more joyful than reading a book, holding it in your hands, flipping the pages…” Reese says. He resorted to hashtags on Instagram to track it. “If there was a chance I could find it, I wanted to find it,” he says of his desperate search.

The search that began in May ended in late June when he found Caitlin Arnold, in Munster (Germany), who had a copy. Caitlin photographed each page and sent the pictures to Reese, “the cover page included”.

“I extracted each passage, translated them using Google Translate and DeepL and pasted it on MS Word. Passage by passage, page by page I put my book together.” He then took printouts of his translation and bound them together.

While the original had 144 pages, his version has 160 pages.

He has finally finished reading his book. Was it worth the effort?

Reese says, “It is scattered, incomplete. It was a difficult time for Herrndorf who was undergoing treatment for glioblastoma (brain tumour) while he was writing it and that shows. The reader can feel his grief. He was looking for a co-author to finish the book but it didn’t work out. As a note in the appendix says ‘Herrndorf accepted that no co-author would be found if everyone but him thought a book by Wolfgang Herrndorf must be written by Wolfgang Herrndorf and by no one else’.”