A photo-artist pays tribute to the victims of COVID-19 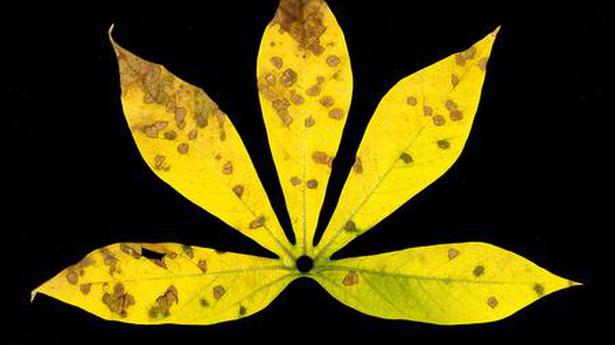 “Every picture of the fallen leaf is my tribute to the COVID-19 victims of my country. One leaf per person who lost the war with the virus but won the honour of the nation,” says Unni Krishnan Pulikkal, a medical doctor and photographer, about his current project: Zen Spots of the Fallen Leaves: Tribute to the COVID Victims of India.

Prior to the lockdown, Unni was busy doing a series of photographs on rocks. He would shoot the huge stones re-imagining them as meteorites zipping in space and finally stamp the film with a black dot; “the mark of a human touch.”

Confined to his home in the rural and wooded area of Kodaly, due to the lockdown, he began filming leaves. “Leaves are full of life, busy doing Nature’s work. I began to observe and film their beauty,” he says. His concept soon changed as the number of deaths from COVID-19 started to rise and death became a living presence. “The mood changed, I could no longer remain unaffected. As an artiste and a medical professional, I wanted to pay a tribute to each person who had succumbed to the virus,” says Unni who began collecting fallen leaves from his garden, backyard and during walks to the river’s edge near his house.

Unni’s modus operandi is to select leaves that reveal an individuality — structure, texture, shape, feature and beauty. “Each person has a special character and individualism that needs to be honoured,” he says. He applies a black dot on the leaf, “as a mark of physical loss, and as a particle of the infinite celestial void that contains the essence of the dead.” Between the living and the fallen leaves, he meditates over “the enigma of death”, which “imparts a unique supernatural charisma.”

From 100 leaves, he can cull only a few distinctive ones, and uses scanography to film and print them on 2×3 ft large format archival cotton rag. Currently with over 500 frames done, he plans to acquire the data of the dead and name each work after a fallen hero.

The founding director of Photomuse, the museum of photography, Unni set up this unique centre at Kodaly in 2014. Being remote but closer to local communities, the centre has been an active source of promoting the art and its understanding. In 2017, Unni did a documentary series on the Kadar tribes of the Annapantham forest in the Vellikulangara Reserve Forest, in which he documented the people of the tribe who lost their habitation in a disastrous landslip in 2005.

As a conceptual photographer, his latest work Transformations, a solo show at Cleveland Photofest last year, drew acclaim. Currently, Unni is a Senior Fellow with Ministry of Culture, Government of India, for Creative Photography and was inducted for his research on Photographic Dyptichs.

Previous article‘The best meal of my life’: readers’ travel tips
Next articleHow travel and holidaying will change in the new normal