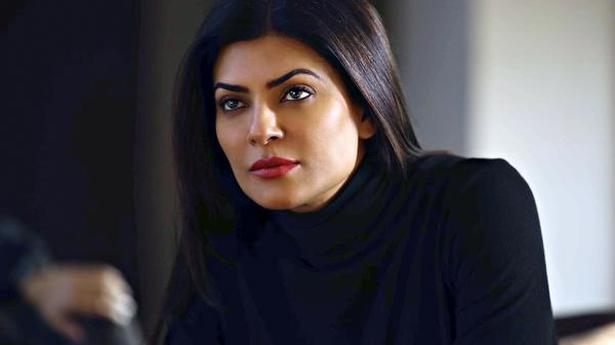 Suspended upside down from gymnastics rings in the opening shot, Sushmita Sen as Aarya, perfectly sets the tone for the nine-episode series. The enigmatic image, contrary to expectations, ushers us into a normal household, grappling with a familial morning routine. It’s a clever glimpse into the possibilities of Aarya shape-shifting into something more badass from a regular home-maker, and the underlying capability, focus and strength required, both in body and mind, to do so. The series rests heavily on Sen’s capabilities and conviction to slip into different avatars, while maintaining her credibility in all the roles — a grieving wife, scared mother, hurt friend, diplomatic daughter, drug dealer, businesswoman and keeper of secrets. Sen’s prowess to transition smoothly, while not giving away too much, is one of the biggest assets of the show.

Aarya is a genre series that’s not too ambitious. The show knows its limits and remains quite basic as a crime thriller, which works in its favour. The big reveals aren’t too shocking, but the emphasis is on how we, as an audience, reach the destination rather than the destination itself. The cliff hangers at the end of each episode — classic old-school television-style — serve their sole purpose of creating a desire to know more. In a genre film, with its time constraint, the narrative is often limited to what’s integral to the plot and the thriller. But with a lavish run-time of nine 50-minute episodes, Aarya can explore the finer relationship details and wallow in moments like the murder of Tej Sareen (Chandrachur Singh). For the most part, even though stretched a bit too much at times, the story remains on track, is simple (sometimes simplistic) to follow and leaves you with utmost curiosity at the end of each episode.

The characters and the actors contribute heavily to build up intrigue, despite a rather rudimentary premise. The show fleshes out characters apart from Aarya, and giving their respective actors enough screen-time to make them believable and some, memorable. Aarya has close to a dozen main characters but they seldom feel like embellishments. Even though most characters are very one-tone (the confused friend Maya or muscleman Sampat), Aarya also brings out the sexuality of ACP Khan and chronicles the various ways in which the three kids deal with their father’s death. Often, the show sidesteps some common depictions and instead shows a smoking grandmother, a cop’s hidden sexuality and a white son-in-law. Even though in consecutive seasons, ACP Khan’s sexuality may become an easy source of conflict, in the first episode it remains largely a characteristic trait, which is rather rare in Indian films and shows.

Grey filters (typical of a crime thriller) mixed with upscale and modern yet traditional Rajasthani mise-en-scène, renders a visually-striking show and lends it an air of high-production value. But the show’s dubbing takes away its expensive look. Perhaps it is the last-minute patchwork, but the characters often sound like they are speaking into a mic, and there is an evident disassociation between the dialogues and the sounds of a landscape. Even the sounds of a wedding in the first two episodes feel engineered rather than atmospheric. The show overall sounds quite shoddy.

The three-camera, long-takes shooting technique pays off rather well, as actors, led by Sen, appear invested. There isn’t a disassociation of emotions between takes and there is a natural fluidity in the way the actors conduct themselves. Sen has a composed, vulnerable and tall presence throughout the show, but there are others like Sohaila Kapur, Vikas Kumar and Namit Das, who are given enough space to showcase their acting abilities. Although one wishes Kapur was given more space in the writing, the show does hint at a second instalment and perhaps she’ll have more to do then. The show, by no means, is extraordinary, yet it keeps you interested in the characters and their lives, and emerges as a good example of basic storytelling done right.