After Viral Interview, Shanthipriya Tweets That Akshay Kumar’s Comment On Her Skin Tone Was ‘Playful’ 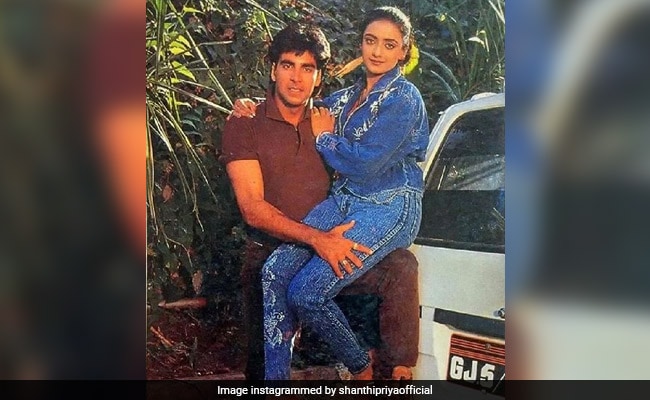 Actor Akshay Kumar’s Saugandh and Ikke Pe Ikka co-star Shanthipriya found a spot on the list of trends after her interview with Navbharat Times (also published in English by Mumbai Mirror), in which she alleged that actor Akshay Kumar commented about the colour of skin, went viral. Shanthipriya offered clarification about the report and said that the comments made Mr Kumar were probably “his way of being playful with me.” She added that she did not believe that he “didn’t mean to hurt me or cause me distress.” Speaking to Navbharat Times, Shanthipriya had said, “I used to wear skin-coloured stockings and once while shooting, Akshay joked about my knees looking darker than usual. He repeatedly said that there were blood clots in my knees and all the actors and other members of the crew had a good laugh. Even though it was a joke, I felt quite uncomfortable. The incident remained in the depths of my mind and I cried a lot over it but never applied any fairness cream on my face.”

After the interview went viral, Shanthipriya tweeted: “I want to make it clear, making those comments were Akshay Kumar’s way of being playful with me. Even though his comments stayed with me for a while, I believe he didn’t mean to hurt me or cause me distress. I adore all of his work and wish him love and luck for his future!”

I want to make it clear, making those comments were @akshaykumar‘s way of being playful with me. Even though his comments stayed with me for a while, I believe he didn’t mean to hurt me or cause me distress. I adore all of his work and wish him love & luck for his future! https://t.co/iISv0SVBno

In the aforementioned interview, Shanthipriya had also said, “Akshay is my good friend and I am not complaining here, but I definitely want to tell you that people have to understand how a joke made about someone’s colour can hurt him/her.”

Shanthipriya also said that her sister Bhanupriya quit Bollywood as the as the industry did not accept her for her skin tone and something similar happened to her. National Award-winning actress Bhanupriya has featured in over 100 films in south. She featured in Hindi films like Dosti Dushmani, Suryaa: An Awakening, Kasam Vardi Ki and Bhabhi (her last Hindi film, which released in 1991).

“When I came to work in Bollywood, my dark colour became my biggest enemy and I have faced a lot of discrimination. My confidence was shattered and I was distracted. After a while, my films flopped, and eventually, my career was over,” said Shanthipriya.

After featuring in several Tamil and Telugu films, Shanthipriya debuted in bollywood opposite Akshay Kumar in 1991 film Shanthipriya and her last movie was 1994’s Ikke Pe Ikka.