AKC Natarajan: A decades-old bridge between the clarinet and Carnatic music 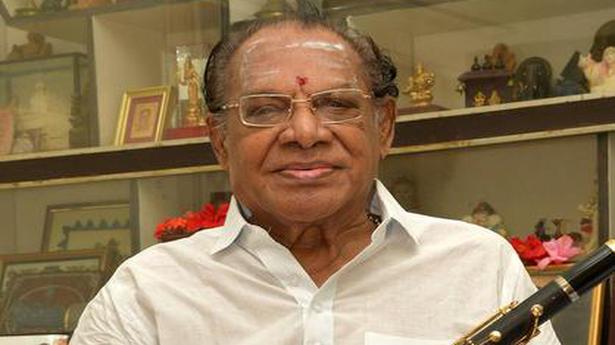 Clarinet exponent AKC (Aenjala Kuppusami Chinnikrishna) Natarajan had a busy schedule before the lockdown was announced. In February alone, he had held a concert in Bengaluru and was also part of the consecration festivities of the historic Sri Brihadeeswarar Temple in Thanjavur. “I haven’t stepped out of my house since March 25,” says Natarajan.

But the lull in the concert calendar has not really stopped the veteran Tiruchi-based instrumentalist’s momentum.

On his 90th star birthday (Vaigaasi Visakham) recently, he was with a special broadcast by All India Radio, Tiruchi. And as the congratulatory messages continue to pour in, Natarajan remains a humble artiste who has customised the clarinet to produce music with a distinctive Carnatic flair.

Natarajan’s name is often preceded by the honorific ‘Clarinet Everest’ to indicate the heights that he has scaled in his 70-year career. “Nadaswaram maestro TN Rajarathinam Pillai, who was also my mentor, bestowed the title on me after a very eventful concert in 1952 at the Neelayadakshi Amman Temple in Nagapattinam,” says Natarajan. “I believe it has been a blessing for me.”

The ebonite clarinet that he performs with, could be at least a hundred years old, says Natarajan. “My father purchased it from an Anglo-Indian band musician in Bengaluru for ₹200, around ₹2 lakhs in today’s value,” he says.

He modified the ‘A Clarinet’ by reducing the original 14 finger holes to seven, closing the rest with wax. “I also added an anasu (a metallic horn in the lower portion) from the nadaswaram, to improve its stage appearance by lengthening the instrument’s body,” says Natarajan. “I kept practising for seven to eight hours every day, until its sound was more similar to the nadaswaram.”

Natarajan’s style is unique in its ornamentation and flourish.

After his début concert at the age of 15 years, Natarajan worked as a staff artiste in AIR’s Kozhikode and Delhi stations. But life had other plans for him: he quit his Delhi posting (as part of the Vadhya Vrindha orchestra led by sitar maestro Pandit Ravishankar and TK Jayarama Iyer) and returned to Tamil Nadu in 1952. With his father’s demise in the same year, and as the sole caretaker of his family, Natarajan decided to pursue his dream of becoming a lead clarinetist more seriously.

He was also encouraged actively by Rajarathinam Pillai, who drew the public’s attention to Natarajan’s talent by giving over his slot to perform at a high-profile wedding in Kallidaikurichi in 1953. “I was scared, but had to obey his order, and that was the first time I saw the audience assembled for Rajarathinam Pillai, listening to me keenly,” says Natarajan.

Besides his concert engagements in Chennai’s leading ‘sabhas’, he was a fixture at the Music Academy’s December season for 20 years. Significantly, the Music Academy chose Natarajan to fill the slot for the late evening concert on December 25, 1956, in place of Rajarathinam Pillai, who had passed away on the 12th of that month. “It was a great honour for me to step in for my mentor, followed by Karukurichi Arunachalam on the 26th at the Tamil Isai Sangam. Both the concerts were broadcast live by AIR, and gave us a boost as performers.” Natarajan has played in foreign venues as well, and has garnered accolades aplenty from various organisations down the years.

“I have not taught any student to play the clarinet, because I’m not sure if today’s children will be able to withstand the struggle of becoming an established artiste,” he says. Instead, he has taught many disciples to take up the nadaswaram.

American Fulbright scholar Professor William E Powell from California is among Natarajan’s foreign disciples to have studied his method of playing Carnatic music on the clarinet.

Even though he came up in times when disciples could not play without their guru’s permission, Natarajan believes that concert performers must learn to gauge their audience’s interest instead of blindly following their teachers.

“To be honest, we are all traders in music because we accept fees for our performances. So our work should appeal to both the expert and the novice listener. We must present music that is contemporary and traditional,” he says.

Previous articleIndie musician Tejas on releasing his new single ‘Lead’ in the lockdown phase
Next article‘Chaavunadappaattu’, written by Anvar Ali and sung by John P Varkey, is an anthem for migrant labourers