Another feather in Bharatanatyam’s cap 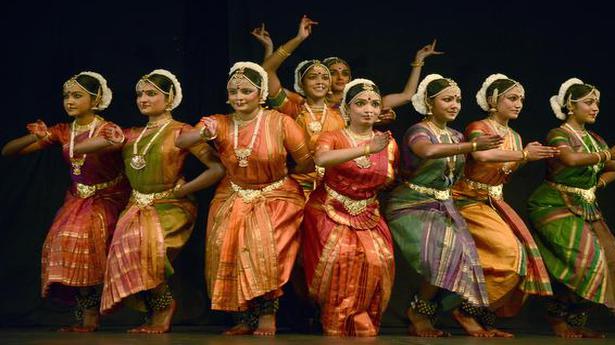 “It is a matter of great pride not only for all of us at Apsaras Arts, but also for the Indian dance community that the Indian classical dance is among the first six inaugural recipients of ‘Stewards of Singapore’s Intangible Cultural Heritage Award.’ Instituted by the National Heritage board of Singapore, this award is given to individuals or groups dedicated to the promotion and transmission of intangible cultural heritage in Singapore. This award recognises our founder’s vision to celebrate local traditions and arts, nurturing young talents to be showcased internationally,” says Aravinth Kumarasamy, artistic director of Apsaras Arts, Singapore.

The institution in a way is an offshoot of Kalakshetra, where Neila and Satyalingam spent nearly 20 years, initially as students and later, as faculty besides being a part of Rukmini Devi’s Ramayana series. When they moved to Singapore, they established Apsaras Arts in 1977 to teach and promote Indian classical dance in Singapore. They achieved great success in this pioneering effort and their contributions were recognised by the Government of Singapore and Neila Satyalingam was honoured with the highest civilian award, the Culture Medallion.

In 2005, the founders inducted Aravinth Kumarasamy, who was working with them, as artistic and managing director of the institute. Aravinth, a native of Sri Lanka, is a multi-dimensional artiste with a strong foundation. He is trained in vocal music, veena, dance and nattuvangam, having learnt from many stalwarts both in Singapore and India. He gained vast experience by working with various cultural institutions such as the Temple of Fine Arts, Nrithyalaya Aesthetics Society and Apsaras Arts.

“My desire, when I took over Apsaras Arts, was to build a dance repertory with full time artistes and create dance productions of international standards. Since there are many dance institutions to impart training here, I decided to focus more on the repertory. With the blessings of our founders, I have managed to establish this Indian performing arts company on a firm footing. We have eight dancers working full time and 12 part-time. My role as artistic director needed me to move away from performing so that I could focus on various departments such as conceptualising, composing music, research and writing scripts, choreographic design, raising funds and marketing.

“I wanted to create a space for artistes to meet, discuss and share ideas, upgrade their skills. My experience of many years in the IT sector helped me adopt a global perspective, imbibe marketing and management skills and apply them to the arts. The award comes as a recognition of our efforts and reiterates the faith that we have reposed in our path,” says Aravinth. Apsaras Arts has created over 10 original dance productions in the past decade and a half. Some of the noteworthy productions are ‘Angkor – Untold Story,’ ‘Nirmanika — Beauty of Architecture,’ ‘Agadhi’ on the plight of refugees, ‘Heroines of Raja Ravi Varma,’ ‘Alapadma – The Lotus Unfolds’ and the more recent magnum opus ‘Anjaneyam – Hanuman’s Ramayana.’ They have constantly explored new ideas like ‘Kannagi’ — the first live musical in Singapore with O.S. Arun singing live as Kovalan and Anita Ratnam and Anandavalli as Kannagi and Madhavi respectively.

“At any given point of time, we work on four or five concepts, researching material for nearly three years, before narrowing down to one or two that will lend themselves to dance-theatre,” says Aravinth about the methodology. “Once the theme is finalised, I go through a mapping process and choreographic design. Then we sit down to write the script, compose music, choreograph, train the dancers, work on costume, lighting and sound design, production, publicity and marketing. If it is a small production, choreography is handled by Mohanapriyan Thavarajah with me composing music. For large scale works, we have two or three choreographers, a guest musician as composer and renowned dancers from all over the world to play important roles,” he elaborates.

“In most of our ensemble works, we look at cross-cultural productions, collaborating with other dance forms such as Cambodian, Javanese and Balinese art forms. Our repertory company has been collaborating with Esplanade on the Bay since 2006 and as a part of their annual Kala Utsavam festival we premiered ‘Anjaneyam…’ in 2017. We invited Rajkumar Bharathi to score the music, Sai Shravan for soundscape, Gyan Dev Singh for lighting design and dancers, V. P. Dhananjayan, Balagopal, Haripadman and Lavanya Ananth to collaborate with Javanese artistes. We had Abhishek Raghuram and Savita Narasimhan sing live with Javanese musicians. Conceived over a four-year period with 18 months of rehearsals, this show was a huge success, getting rave reviews. This work was also chosen as one of the inaugural performances, screened by the newly launched ‘SISTIC LIVE,’ a digital platform by SISTIC LIVE, Singapore.”

Aravinth feels the need to look at the vast unexplored art forms of South-East Asia. Inspired by his manaseeka guru Dr. Padma Subrahmanyam, he wants to look at the Natya Sastra connections in places such as Thailand and Bali, where Bharatamuni is venerated. He describes his experience: “Once, when we visited Cambodia, we were invited to a dance school in Phnom Penh. When we reached, they suggested we wait and watch their prayers. All the dancers, teachers, musicians came out and displayed the instruments and costumes. It was Thursday (Guruvaar), and they were offering prayers to Brothrishi Bharata. I was stunned because even in India, we offer prayers to preceptors only on Vijayadasami and here they were praying to Bharatamuni every Thursday. I now had no misgivings about working more with South-East Asia.”

Also, he cannot forget their dance tour of India, when they travelled across the country performing in many small towns and villages. Carrying their instruments and costumes they used every form of transport — trains, vans and cars to bullock carts, cycle rickshaws and even boats to reach the venues.

Aravinth is proud of the fact that his ensemble is managing to sustain itself professionally. “We have nearly four shows every month and we present only our productions. All our works are based only on Bharatanatyam because we need to work with what the dancer’s body is trained for. There is no need to look beyond, for Bharatanatyam gives us enough scope for creative explorations.”

Inspired by Milapfest, he started a decade ago, ‘Dance India Asia Pacific,’ in collaboration with the Singapore National Arts Council, Milapest and Esplanade Theatres on the Bay. A development initiative combining dance training programme, conferences, talks, book readings and film screenings, it attracts more than 2,000 participants from Singapore, India, Indonesia, Sri Lanka, Australia, and other countries.

He has received many awards and is a member of the advisory board of National Arts Council, Singapore.

“My dream is to see our ensemble gain greater recognition as a world class Bharatanatyam repertory company,” says Aravinth Kumarasamy. 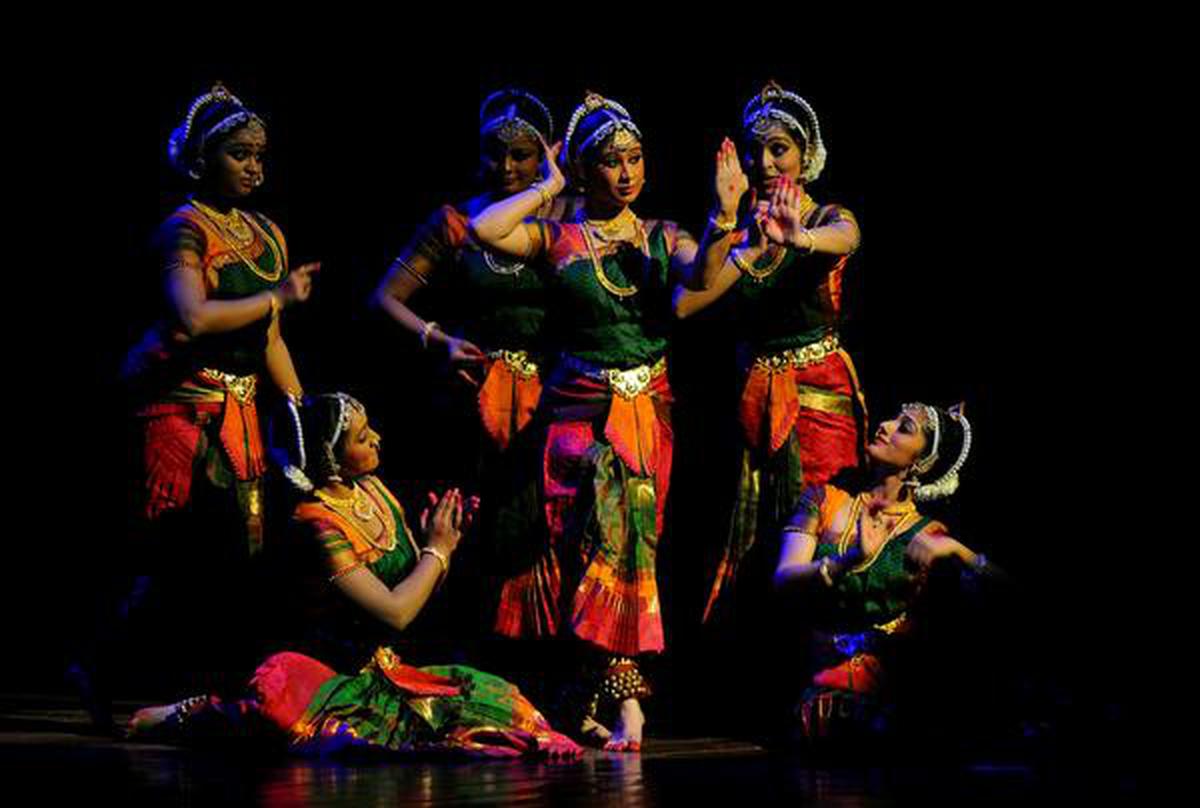 Mohanapriyan Thavarajah, the resident choreographer, says, “Since I’m involved in the entire process, I’m able to create what is required using the Bharatanatyam grammar. For instance, in ‘Alapadma…,’ I created an Alapadma alarippu, where the group movements were designed to look like a blossoming lotus. For the boat sequence in ‘Agadhi,’ the entire scene showed the refugees getting into the boat and travelling in the sea. The choreography was based on a soundscape, which was a mix of the rhythm of waves and heartbeats. It was highly appreciated for bringing out the anxiety of the refugees.