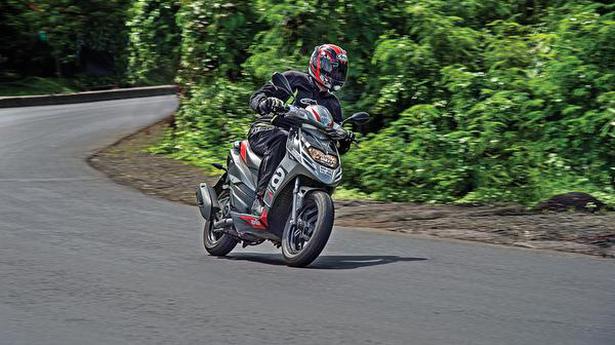 The Aprilia SR 150 took the market by storm when it was launched in 2016. Never before had India seen a scooter that ditched fuel economy and practicality for sporty performance and handling. Now, with the introduction of BS6 norms, the SR gets a slightly bigger and more powerful engine. Does that equate to more fun? We find out.

The SR 160 looks identical to the SR 150, save for the tweaked decals denoting the 160cc engine. It still looks as sharp and sporty as before, with a distinct identity of its own. The14-inch wheels lend the Aprilia a unique stance unlike anything seen in the rather crowded Indian scooter space. The fit and finish is good in most places, but I would have liked the use of a better grade of plastic around the instrument cluster and the switchgear. It just does not feel premium enough for a scooter priced over ₹1 lakh. The SR 160 does not get a LED headlamp, there is no multi-functional ignition slot and the part digital instrument cluster could have displayed more information.

The Aprilia SR 150 has always been lauded for its benchmark-setting performance and a look at the SR 160’s motor suggests the bar may have been pushed higher. The cubic capacity of the air-cooled single has gone up slightly from 154.8cc to 160cc via an increase in the stroke from 58.6mm to 60.6mm. Meanwhile, the carburettor has been replaced with a fuel-injection system. The result of these efforts is an increase of 0.84hp in power and 0.7Nm in torque.

Crank up the engine and you will notice it sounds similar to the BS4 unit at idle. However, once you set off, you will find that the scooter feels notably smoother. The smoothness has come at the cost of initial punch off the line that made the previous scooter a bit more exciting. This reduced feeling of urgency shows in our performance tests as well. Clocking 7.96sec in the sprint from 0-60kph, the SR 160 is actually 0.49sec slower than its predecessor.. Nevertheless, it remains India’s quickest scooter by a slim margin over 125cc scooters such as the BS6 Suzuki Access (0-60kph in 8.08s).

As far as top speed is concerned, the SR 160 managed to nudge past 90kph on the speedometer, which was confirmed by our Vbox numbers. It is great to see that the speed displayed is now accurate and Aprilia has finally fixed the massive speedo error issue that exaggerated the SR 150’s top speed.

There is no change in the way SR 160 rides over its predecessor. Aprilia had tweaked the front fork to make the suspension more absorbent, and the SR 160 continues in the same vein. Rides in low speed remains stiff though not as jarring as the SR 150. The SR is also easy to tip into a corner despite the 14-inch wheels, and the MRF tyres offer sufficient grip and feedback. The brakes are the best we have experienced on an Indian scooter. The bite on the front disc is powerful and the feedback through the lever is so accurate, it shames the braking on a few motorcycles that cost more.

The Aprilia SR 160 is one of the most exciting scooters in the market though what might stop you is the ₹1.24 lakh (OTR Mumbai) price tag for the base version. That is a steep price for a scooter that offers very similar riding experience as before without any additional features.

Nevertheless, the SR 160’s BS6 motor is a sign of what we can expect from the upcoming Aprilia SXR 160 maxi-scooter, which will use the same engine.

Honda City: subtle changes, ride quality give it an edge over its predecessor

The City is easily Honda’s most important model in India, and the new fifth-gen model, like its predecessor, boasts an evolutionary design.A lot has...
Read more