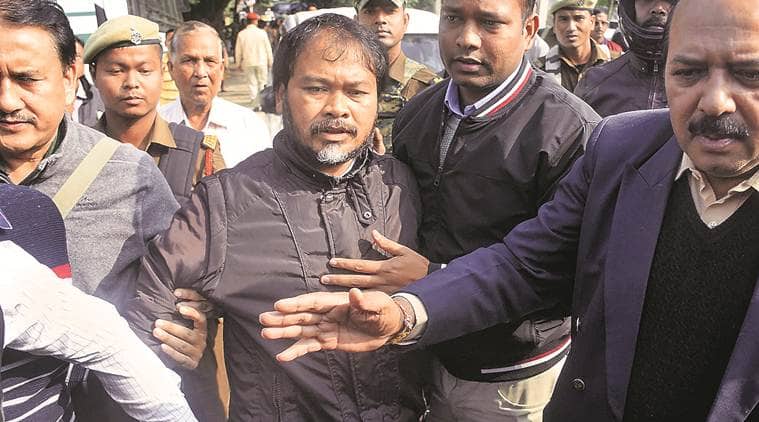 Activist Akhil Gogoi, who has been charged with sedition by NIA and is currently lodged in the Guwahati Central Jail, tested positive for Covid-19 on Saturday, a senior jail official said.

The development comes amidst a growing concern by political parties and civil society members about Gogoi’s health. He has been suffering from cough, fever and body aches over the last few days.

Earlier on Thursday, two members of the peasants’ rights group Krishak Mukti Sangram Samiti (KMSS), which Gogoi leads, had tested positive. Bittu Sonowal and Dhairjya Konwar were lodged in the jail with Gogoi.

Gogoi, Sonowal and Konwar were all booked by the National Investigative Agency (NIA) on charges of sedition and under provisions of the Unlawful Activities (Prevention) Act for allegedly being the overground workers of the banned CPI (Maoist), soon after the anti-CAA protests broke out in Assam in December last year. Gogoi had said that he has never had anything to do with the Maoists.

Dasarath Das, Inspector General of Prisons, Assam has said that a total of 55 inmates of the central jail in Guwahati have tested positive till now. Former Bodo insurgent leader Ranjan Daimary also has tested positive in jail.

There has been a widespread demand of Gogoi’s release from prison. In June, inmates of the Guwahati Central Jail went on a hunger strike and one of their key demands was the release of Gogoi.

Lurinjyoti Gogoi,  General Secretary, All Assam Students’ Union on Friday in a tweet said: “The treatment meted out to Akhil Gogoi in a democratic republic is worse than what we can expect to happen in a dictatorship. This kind of suppression of dissenting voices is unacceptable and I have repeatedly stood against such atrocities and fascist tendencies and will continue to do so. I take this opportunity to once again demand the immediate release of Akhil Gogoi and all other jailed anti-CAA protestors.”

Prominent writers of Assam have also penned an open letter to Chief Minister Sarbananda Sonowal demanding proper medical treatment for Gogoi and his associates, and stressing “on the release of all political prisoners of the anti-CAA movement across the country”.