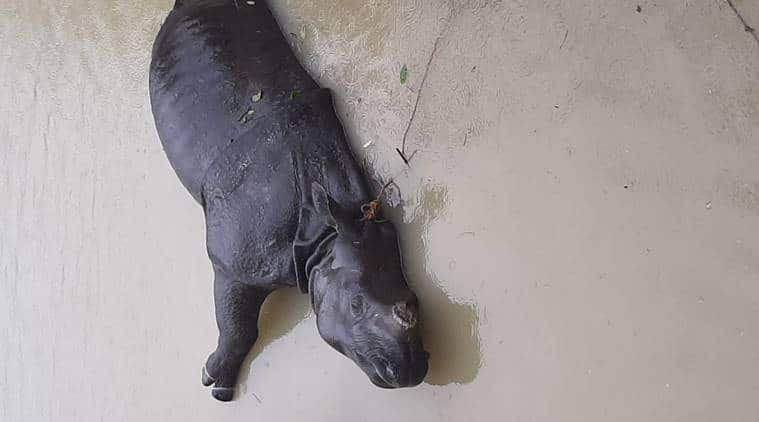 As floodwaters continue to ravage Assam, a female rhino drowned in Assam’s Pobitora Wildlife Sanctuary. The carcass was found by the patrolling team at 11.45 am on Monday, authorities said.

“It was found above water, on the side of a drain, with its horn intact,” said Jitendra Kumar, DFO, Guwahati Wildlife Division. The wildlife sanctuary — which has a population of 102 rhinos as per 2018 census — is located about 50 km from Guwahati. The current floods have affected 12 out of 25 camps in the sanctuary. “The rhino was old and we suspect it was not able to tackle the currents — it died by drowning,” he said, adding that wild boars and wild buffaloes were affected by the floodwaters too. “The flood is still at a normal level, but it is possible that more deaths will be recorded when the waters recede,” he said.

Sapiens or otherwise, we’ve got you covered!

Visuals from @kaziranga_, where ⁦@assampolice⁩ & Forest personnel are ensuring that animals cross the road safely.

We’ve all got our part to play, drive slow and #WatchOutForWildlife. pic.twitter.com/Nf7rJHaK2w

In Kaziranga National Park (KNP), three hog deer, fleeing the floodwaters, were killed by vehicles on the National Highway-37 (NH-37). Despite nearly all of the UNESCO World Heritage Site under water now, authorities said the situation was not bad yet. “The water is near the national highway, if the levels further increase, it will enter the highway,” said KNP director, P Sivakumar. During the deluge last year, the NH-37 — which cuts across KNP — was shut for three days as water breached the road.

During the floods, the highway often emerges as a death trap for animals fleeing the inundated grasslands for safer grounds in the hilltops of Karbi Anglong district.The KNP authorities have set speed limits of 40 kmph, failing which the violators will be fined. “This time, we are going to fine all the vehicles which are violating the speed limit in the corridor areas,” said Sivakumar, adding that they were going to be stricter than the previous year. “In the last three years, we booked only 40 vehicles, but this time we have already identified more than three hundred vehicles in a single day. The fine is up to Rs 9,000,” he said. The authorities have also increased the number of barricades in the nine corridor areas of the Park.

Please help us make way for our friends from Kaziranga National Park.

Rathin Barman — who heads Center for Wildlife Rehabilitation and Conservation (CWRC) to rescue animals near Kaziranga — said that the flood situation is not severe yet. “It is only June — the actual floods will happen in July. The situation is not that serious yet but yes, the mass movement of animals to Karbi Anglong has begun,” said Barman, who is Joint Director at the Wildlife Trust of India (WTI). He added that 10,000 animals — mostly hog deer — crossed the Panbari animal corridor on Monday alone. He said that four-five injured animals have come to CWRC. “But it was minimum injury and we have already been able to release them,” he said.

As per the daily flood report by KNP authorities, out of the Park’s 223 camps, 146 are inundated.

Meanwhile, four persons were killed in floods on Monday, taking the total flood toll this year to 24.

“The weather forecast is positive now, and the flood situation is expected to improve in the coming days,” Pankaj Chakravarty, State Project Co-ordinator of the Assam State Disaster Management Authority (ASDMA) said.

According to the Monday’s bulletin by the ASDMA, one person died each in Barpeta and Goalpara, while two others died in Dibrugarh district.

Over 13 lakh people in Assam’s 25 districts were affected, according to the ASDMA. Over 27,000 people were lodged in 143 relief camps across the state. In the affected areas, 130 relief distribution centres were functional.