Villagers row a makeshift raft through a flooded field to reach a safer place at the flood-affected Mayong village in Morigaon district, in the northeastern state of Assam, June 29, 2020. (Reuters Photo)

Even as floodwaters indicated a receding trend in Assam, six people lost their lives on Wednesday, while one person died in a landslide, the Assam State Disaster Management Authority (ASDMA) said. The cumulative death toll stands at 33, this year.

While the six flood deaths were recorded from Dhubri, Nagaon, Barpeta and Nalbari, a 50-year-old from Cachar district’s Udharbon revenue circle died as a result of a landslide. As per ASDMA, the cause of death was a result of “electrocution due to uprooted tree falling on power line as a result of landslide.” Last month, 21 people, including minors, had died due a series of landslides in Cachar, Karimganj and Hailakandi districts.

“The overall trend is improving, the waters are receding because the rains have lessened,” said an official from ASDMA.

As per a release by the Central Water Commission (CWC) on Wednesday, reduction in rainfall has led to slow fall in the level of most rivers — some of them, however, still continue to be in the ‘Severe Flood Situation.’ 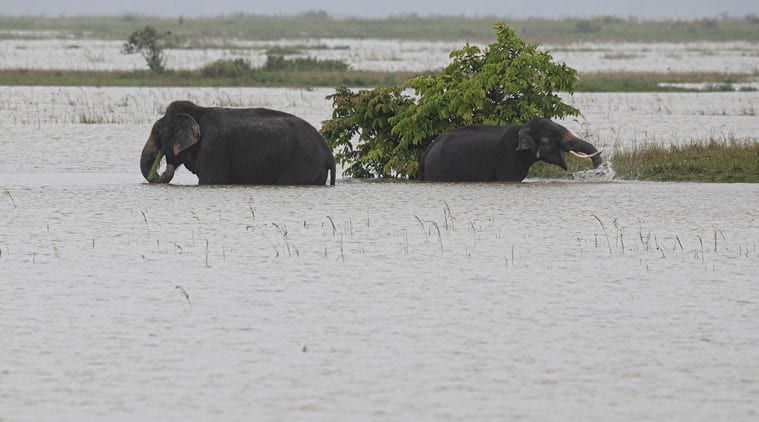 “River Brahmaputra has started falling in all the districts in Assam. Since rainfall is likely to continue with lesser intensity during the next 4-5 days, the Above Normal to Severe Flood situation is likely to continue with slow falling trend in the states of Arunachal Pradesh, Assam and Sub- Himalayan West Bengal during the next 3-4 days,” the CWC release further said.

The ASDMA release said that the Brahmaputrra river was flowing above the danger level at Nimatighat in Jorhat, Tezpur, Guwahati, Goalpara and Dhubri.

Meanwhile, at the Kaziranga National Park, nine flood-related animal deaths were recorded on Wednesday, with one wild boar and one swamp deer drowning and seven hog deer hit by speeding vehicles on the National Highway-37 when fleeing floodwaters.