Assam gas leak firefighters: One’s heart was in football, other was set to retire One loved his football, and the other was set to retire after almost three decades of service. On Tuesday, firefighters Durlov Gogoi (35) and Tikheswar Gohain (55) lost their lives fighting a fire caused by a natural gas leak in a well owned by Oil India Limited (OIL) in Upper Assam.

Chief Minister Sarbananda Sonowal has extended his condolences. In a release, the Chief Minister said the two had made a “supreme sacrifice for the greater interest of the society”. He also directed that their last rites will be performed with state honours. A sum of Rs 1 crore and Rs 60 lakhs have been announced to the families of Tikheshwar and Durlav respectively — the sums based on their years of service at Oil India. The families would also receive pension and other financial benefits, and one eligible member from each family would be given a job in OIL.

Both Durlov and Tikheswar were Assistant Operators of OIL’s Fire Services department. “It is beyond my imagination that this happened…we gave it our all through these 14 days,” said R K Singh, General Manager of Fire Services at OIL. “We were there day and night, spraying water to contain the blowout.” 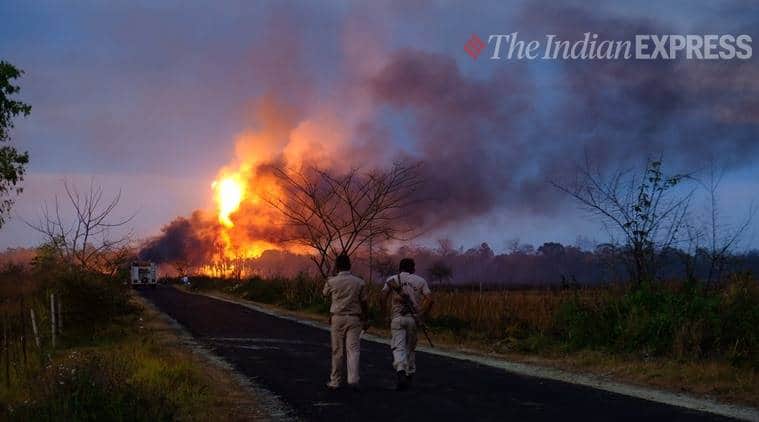 On Tuesday afternoon, Baghjan 5 well near Dibru-Saikhowa National Park caught fire 14 days after it had reported a blowout (Express Photo by Diganta Rajkhowa)

“The two jumped into a pond near the well site — sadly, they could not make it,” he added.

An OIL statement said, “Four persons (two from OIL, one from ONGC and one from Contractor) sustained minor injury and have been given immediate medical help.”

The OIL also said “immediate compensation is being disbursed to the families”.

Durlov, who was recruited to the Fire Services department in 2013, was posted in Arunachal Pradesh but had come to Assam during the lockdown. Bhabo Gogoi, his father, said over the phone from Namrup, “Since he was here, he was called to help with the blowout… my son is gone. But this was an accident and he died doing his job.”

Durlov first joined OIL as a contractual employee in 2003. “He and I got in under the sports quota,” said Durga Boro, who was his colleague for five years, “We played many national and state- level games for OIL Football Club — ours was one of the strongest teams in Assam.”

OIL salutes the Supreme Sacrifice made by our brave firefighters who laid their lives in the line of duty.

Our deepest condolences to the family, friends and relatives of Shri Durlov Gogoi and Shri Tikheswar Gohain. pic.twitter.com/uDP3bB0Kwp

“He was a good guy, always smiling, always joking… but luck did not favour him. This is very unfortunate,” Boro said.

In 2013, Durlov retired from the football team and started training in the Fire Services department. “His heart was in football though,” said his father.

Durlov is survived by his wife and a six-year-old son.

Tikheswar, on the other hand, was an OIL employee for 28 years, said Tridiv Hazarika, OIL spokesperson.

“He was in the fire services for 12 years, and in the LPG department earlier. He was promoted too,” said Thireshwar Gohain, his cousin. Tikheswar, hailing from Chabua, is survived by his wife and two sons, aged 18 and 22.