Ather amps up the performance 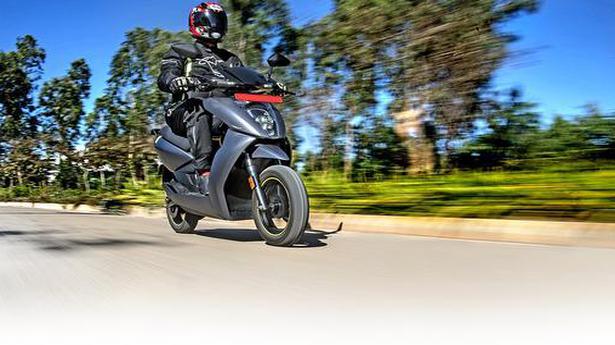 Ather Energy is a shining example of a start-up that has shown the world that it is possible to make an electric scooter with reasonably good performance and range without compromising on design or build quality. After launching the successful Ather 450, the company isn’t resting on its laurels, and has spawned an evolution of the 450, the Ather 450X. It promises improved performance, battery range and other features. The question is, does the ‘X’ multiply the Ather electric experience?

How does it look?

The Ather 450 has always stood out for its futuristic design, and it is the same case with the 450X, as both e-scooters share the same bodywork. The only elements that distinguish the X from the 450, then, are the ‘X’ badge and three new colour options — grey, white and mint green.

Sit behind the bar and you will notice a brand-new touchscreen instrument panel that packs in more features. The Android-based system (plain Linux in the 450) includes Bluetooth and Wi-Fi connectivity, allowing users to pair their phone to get incoming call alerts or listen to music on the go, via the Ather app. One can simply tap the screen to change music tracks or answer calls. If you dislike the idea of taking your hands off the bars, the toggle switch can be used to carry out the same function.

The 450X is considerably lighter than the 450. Most of the weight-savings are at the front end, achieved by installing a lighter instrument cluster, removing the on-board charger and installing a conventional tubular handlebar.

In order to improve performance and efficiency, Ather has developed a new and bigger lithium-ion battery, an efficient battery management system and re-tuned the motor to develop higher peak power. The installed battery capacity is 2.9kWh (up from 2.71kWh in the 450) and that translates to an improved battery range, from 75km to 85km in Eco mode. It takes about 5hr 45min to charge the battery to 100 percent using a standard home-charging point.

The new e-scooter offers the three riding modes seen on the 450: ‘Eco’, ‘Ride’ and ‘Sport’. Each provides more performance and, consequently, quicker acceleration. However, the icing on this performance cake is the new Warp mode of the 450X that turns everything up to 11.

I have never felt an electric scooter surge ahead with such alacrity — and that is saying something. 0-40kph comes up in 3.3sec, while the sprint from standstill to 60kph is dispatched in 6.5sec. That is almost 1sec quicker than the fastest petrol-powered 125cc scooters. Its top speed remains capped at 80kph, but that is only one side of the story. It is the roll-on acceleration, especially between 20-50kph, that makes this e-scooter super responsive, and I think that should make it easy to keep up with, or even zip past, big-city traffic.

As entertaining as it may be, though, here is the caveat. All of this brisk performance comes at the cost of a subscription plan that will set you back by ₹1,999 — every month. Dubbed the ‘Pro’ package, it gets you the best possible acceleration and range (85km) along with access to fast charging at 1.5km/min. Customers can also choose the Plus plan, at ₹1699, that drops the motor’s peak output to 5.4kW and 22Nm of torque. The battery’s range also falls by 10km (to 75km) in ‘Eco’, whilst usable capacity (which is always lesser than installed capacity) sees a reduction to 2.4kWh (it’s 2.7kWh in the Pro plan). Think of it as a cell-phone data plan where you would pay more for faster browsing and buffering speeds.

The 450X can also be purchased without the subscription plan for ₹1.49 lakh (for the Plus) and ₹1.59 lakh for the Pro. This does not include the cost of the Ather connect pack, which is needed for OTA updates. Buying upfront doesn’t give you access to the free fast-charging Ather Grid network either. Subscription guarantees OTA updates, the fast-charging network and an unlimited battery warranty (three years without subscription).

We are happy to report that Ather has not tinkered too much with the setup and the 450X’s performance is genuinely entertaining; but it’s of no use if the chassis isn’t up to the task.

How does it ride?

The steel-aluminium hybrid chassis is identical to the 450’s, and so are the brakes, suspension units and the 12-inch wheels. The only difference is that the telescopic forks have been stiffened for added firmness. Upon riding the 450 and 450X back to back, it was apparent that the X felt lighter and quicker to steer. The scooter was also notably more flickable. The firm setup at the front made it thud over potholes, which wasn’t the case with the 450’s relatively plush setup.

The rear monoshock remains the same; however, it could do away with the pogo-stick-like effect that occurs at low speeds over a series of undulations. That said, the handling is pretty confidence-inspiring, as long as you stay within limits. But for those who want to push the handling envelope even further, Ather will also sell a set of TVS tyres that are wider; both at the front (100/80-12) and rear (110/80-12).

That electric scooters are here to stay is an understatement. The fact that not only start-ups like Ather, but also mainstream manufacturers like Bajaj and TVS, want a slice of this delicious pie, has created quite a buzz in the electric two-wheeler space. What works in Ather’s favour with the 450X is its unique styling, finish levels and technology. Above all though, it has a sense of desirability that one just cannot ignore. I, for one, cannot believe an electric scooter can be a lot of fun; and as much as I love petrol-powered scooters, the Ather 450X has made me pause and think. They may not make complete sense yet, but they are definitely starting to look more tempting.