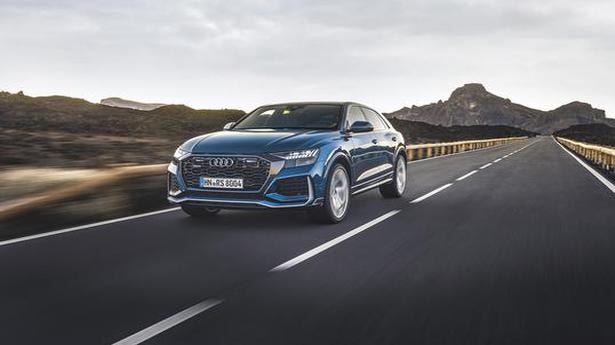 The RS Q8 isn’t just Audi’s quickest SUV, it is also the fastest SUV to lap the Nürburgring, which is now the de facto performance yardstick. Clocking at 7 min and 42.253 secs, the RS Q8 was around 8 secs quicker than the Mercedes-AMG GLC 63 S, the previous record holder, on a damp day! Lucky for us Audi flew us down to the island of Tenerife to get a taste of its latest high-performance SUV.

Audi could not have selected a better venue for the drive. Tenerife boasts of Spain’s highest point — Mount Teide — at an elevation of 3,718m, and the plan was to drive from the beachfront all the way up to the base of the volcanic cone through a mix of open highways and twisty mountain roads. It was the perfect environment to highlight the car’s strengths: power and poise.

Speaking of power, the RS Q8 uses the same 4.0-litre TFSI V8 that powers the Porsche Cayenne Turbo and the Lamborghini Urus. Here, it puts out 600hp and a massive 800Nm of torque. That is plenty of bang; even more than the Porsche’s 550hp and 770Nm. It is, however, lower than the Urus’ output of 650hp and 850Nm.

Fire up the RS Q8 and it growls to life. Decibel-wise, the rumble is rather low, and at slow speeds in ‘Comfort’ mode, you would be hard-pressed to tell this version packs some serious firepower. Move into a sportier mode and the mighty V8 will make its presence known clearly; there is also an optional RS sport exhaust system that takes things a notch higher. Highlighting the SUV’s breadth of talents are a plethora of drive modes that tweak performance, including a dedicated off-road mode that raises the car by 90mm, and two individually configurable ‘RS’ modes called RS1 and RS2. While RS1 lets you set up the engine, gearbox and suspension, RS2 influences the Electronic Stability Program. The two modes let you store your favourite setup for a quick call to duty via the steering wheel-mounted ‘RS’ hotkey; it is basically the programmable asterisk button from other Audis. The RS Q8’s four-wheel steering gives it good manoeuvrability in traffic and tight parking spots. Given the SUV’s size, I expected to make frequent two-point turns, but I didn’t have to. The 8-speed torque converter is smooth and quick, but at times, it takes a while to downshift. Moreover, in Comfort mode, upshifts are quite early, as it runs a very economic setting. There is even a mild-hybrid system with cylinder deactivation, and Audi says that between speeds of 55-160kph, if the driver lifts off the throttle, the engine can deactivate for up to 40 seconds, depending on certain conditions. However, with this being an RS-spec Q8, I wasn’t interested in driving economically. The wave of torque flowing from the V8 is immense and is accompanied by a nice baritone growl from the exhausts.

It is in the mountains where the SUV’s handling really shines. Road grip is excellent, and there is negligible body roll. The steering is well weighted and quick too. I am soon attacking corner after corner, and the RS Q8 wants to go faster still. This sublime handling and body control is down to the RS Q8’s hardware: the wide front and rear track, optional active torque vectoring at the rear axle, four-wheel steering, and the air suspension setup — taken from the SQ8 — feature firmer spring and damper rates. Then, there is the 48V active anti-roll bar system that uses an electric motor to twist the roll bars in the opposite direction to counter body roll.

Rounding off the handling bits are the massive 22-inch rims and 295/40 tyres — the largest factory-installed units on an Audi. Audi says the large rims were also a necessity due to the large disc brakes used. The brakes work consistently, but given the SUV’s weight, the optional carbon-ceramic brakes heated up and began squealing during some fast, downhill driving. Backing off for a while brings things back to normal though.

Tenerife’s well-surfaced roads make it hard to judge overall ride quality. There is an indication of a slightly firm ride — understandable, given the firmer spring and damper rates — but we will have to wait and see how it fares on our roads.

On the design front, Audi has added plenty of sporting touches inside and out to set the RS apart from the standard Q8, including a sportier body kit, honeycomb grille and large oval exhausts. The cabin features a lot of Alcantara and carbon-fibre finish, along with getting RS sport seats and RS-specific graphics in the virtual cockpit and multimedia display. Even the optional head-up display gets RS-specific screens. As for equipment, the RS Q8 comes loaded with all the goodies you’d expect from a high-end Audi — a killer 23-speaker Bang & Olufsen sound system, and loads of driver assists like collision avoidance assist and intersection assist.

While the Audi RS Q8 will remain a niche model, it could be among the better faring options. Its low roof lends it a sporty enough look, and by avoiding the sharp coupé-like dip at the rear, there is more headroom, and thus it could appeal to a wider audience. Furthermore, in ascending to the altar of speed, Audi hasn’t made any sacrifices — the RS Q8 is comfy, practical and well-kitted. You could drive it to your golf club, take your family out on a quick dash across the country, or even take it to the racetrack for some fun.

The RS Q8 isn’t going to be cheap as it will be a full import and is likely to cost close to ₹2 crore. However, it would sit well against the BMW X6 M and Mercedes-AMG GLE 63 Coupe, and even the Cayenne Turbo Coupe. However, against the Lamborghini Urus, the RS Q8 would be a relative bargain. No doubt the Urus is an extremely capable SUV with a fancier nameplate to boot, but Audi has the title of the world’s fastest SUV.

Previous articleFighting cyclones and coronavirus: how we evacuated millions during a pandemic
Next articleThe S 1000 XR is BMW’s latest offering in the adventure sport segment