Home States Assam Bangladeshis on way home held for over a month, police say they...
StatesAssam

Bangladeshis on way home held for over a month, police say they violated visa rules 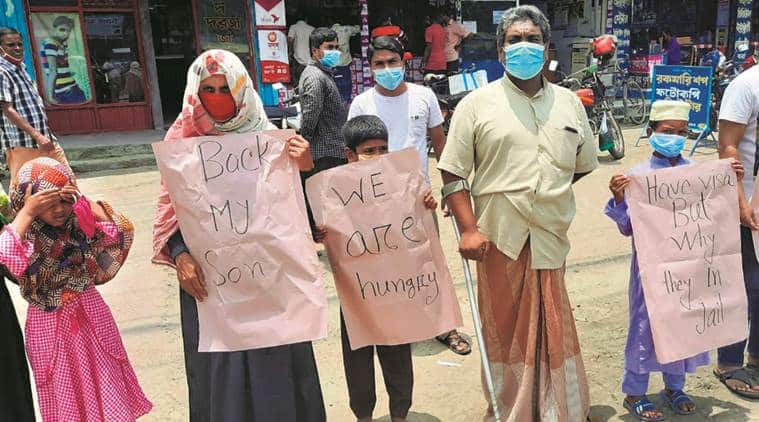 
A protest in Chilmari, Bangladesh, demanding the release of the group of 26 arrested in India. (Express Photo)

Nearly two months after a group of 26 Bangladeshis were arrested in Assam’s Dhubri district while they were attempting to make their way back to their country amidst the lockdown, they continue to remain under arrest on charges of alleged visa violation.

While calls for the release of the Bangladeshis — who worked as fishermen and farm labourers, and who had valid passports stamped with travel visas — have been growing in the neighbouring country, the Assam Police have filed criminal charges against the men, alleging that they were engaged in employment activities in Jorhat, Golaghat and Sivasagar districts and therefore, violated the terms of their T-1 visa — a non-work visa.

On May 2, during the second phase of the country-wide lockdown, the 26 men boarded two minibuses from upper Assam’s Jorhat district to get to the Changrabandha border checkpoint in West Bengal’s border district of Cooch Behar, from where they planned to return home. The group had the required passes for travelling inter-district in Assam.

The next morning, at Bahalpur in Assam’s Dhubri district, police detained the Bangladeshi nationals, screened them for Covid and put them into institutional quarantine.

On May 5, police filed an FIR, accusing the men of forgery and violation of sections of The Foreigners (Amendment) Act, 2004 and The Passports Act, 1967. The men are now in a jail in Dhubri. On Friday, the court of the Sub-divisional Judicial Magistrate in Bilasipara heard their case and fixed the next date of hearing for July 6. While each of the 26 men held a passport and a valid multiple-entry travel visa — which permitted them a maximum of 90 days during each visit — there is no clarity on when exactly they entered India. According to the police, they probably entered through Changrabandha at different points in 2019 and 2020.

Among the arrested are brothers Mohammad Manik Mia (28) and Mohammad Abu Hanif (23). Their father Mohammad Lal Mia told The Indian Express on the phone that his sons are fishermen and farmers. “My two sons are my strength. They had gone to India once earlier too, and there was no problem then… I am ill and cannot work. I have two daughters too. We are very poor. What will we eat if my sons do not return?” he said.

Dhubri Superintendent of Police Yuvraj said, “They were on tourist visas but were working and earning. They were clearly violating terms of their visas. They were arrested and now the case is under investigation.”

Rajarshi Dasgupta, the government’s legal aid counsel representing the Bangladeshi nationals, said there is no evidence of their employment anywhere. “They are fishermen and were not engaged in any job anywhere. They got stuck here due to the lockdown,” Dasgupta told The Indian Express.

Dasgupta also argued that the men had valid papers. “When they were apprehended, the men did not claim to be Indians. They said they were Bangladeshis and wanted to go back. And Bangladesh is willing to take them back. Filing criminal charges against them is not fair,” he said.

Meanwhile, in Bangladesh, calls for the release of the 26 men have gone up. Nahid Hasan, an activist who led protests in Chilmari with relatives of the detained men, said, “Throughout history, in these parts of the world, people have been travelling up and down. Many people from Kurigram go to India with valid documents.”

Bachu Mia, secretary of the Bangladesh chapter of the India-Bangladesh People’s Solidarity, said, “These people are very poor and hardly know the difference between a travel and work visa. They are just simple fishermen.”