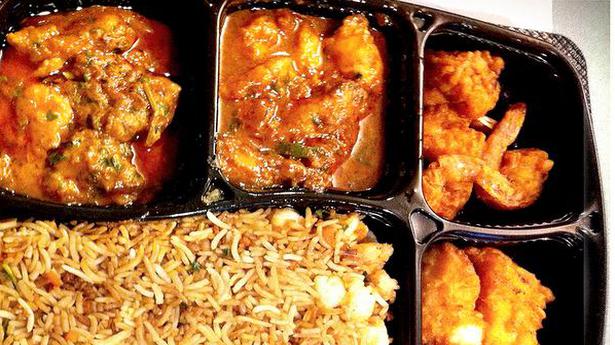 Buffets leave me cold. There was a time when, as hungry young men, we used to save up money to have the midnight buffet at the Taj Mahal Hotel on Man Singh Road. I think the buffet in the 1970s cost ₹20 or so, and we used to make sure that no dish was left untried.

Older and wiser now, I turn away from buffets. For one, a lot of places warm up leftovers to make the buffet table seem bigger and better. Two, when there is so much on offer, you don’t know what to eat, and what not to eat. And, three, you try and taste as much as you can — and end up not enjoying any of the dishes. So, when friends and family hold forth on some value-for-money buffet with a lavish spread, I merely sniff.

But now that buffets are a thing of the past – heck, restaurants are becoming old memories — I am actually thinking of overladen tables rather nostalgically. And that is why I ordered from an eatery that is known for its unlimited buffets. Barbeque Nation — in many parts of Delhi and in other cities — used to be quite a popular place, and I had heard paeans sung about their prawns. I thought it was time to order a meal from its delivery outlet called UBQ by Barbeque Nation.

One of Barbeque Nation’s USPs was the affordable rates at which it offered a buffet that included everything from fried shrimps, various kinds of kababs and tandoori vegetables to biryanis, curries and desserts. The UBQ rates are very reasonable, too. We asked for a U&BBQ seafood platter (₹399), U&BBQ non-veg buddy platter (₹379) and a Deluxe non-veg thaali (₹299).

It goes without saying that barbecued, grilled or fried food has to be eaten right off the grill, but I wasn’t unhappy with my dinner. We heated up the food, which took away some of the crispiness, but I thoroughly enjoyed the shrimps — still crunchy and juicy — and the butter chicken. The chicken gravy was thick, and sweet-tart. I tried out a bit of the prawn fried rice with the Oriental fish, and quite liked it, too.

What I really enjoyed was the dal makhni, which was deliciously creamy, and did a nice waltz with the paratha. Tangri is not my favourite, so I didn’t go there. I had the fish, but didn’t think much of it. It was bland, and the batter did nothing to enhance its taste. The dessert of four tiny gulab jamuns (called angoori gulab jamun — for its size, I suppose) was a nice way to end the meal.

When life returns to normal, and we venture out again, I may just visit the nearest Barbecue Nation outlet. I think I need to see what’s on the table.

The writer is a seasoned food critic