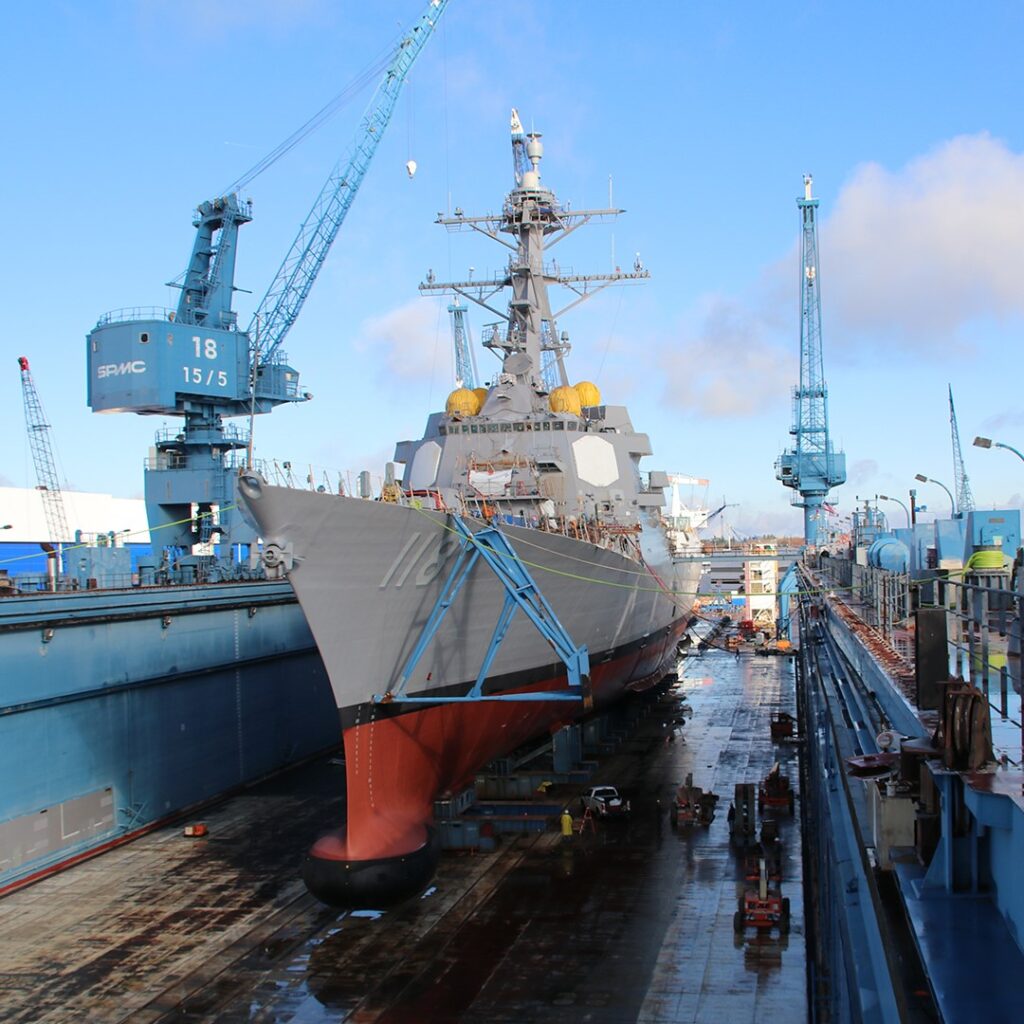 An Arleigh Burke-class destroyer under construction at Bath Iron Works.

WASHINGTON: Shipbuilder Bath Iron Works is looking to hire hundreds of non-union workers to temporarily replace 4,300 unionized shipbuilders on strike since June 21, the news coming out even as the union met with a federal mediator.

The union’s president, Robert Martinez., said in a statement that the search for contract workers “is further proof that BIW has no intention of bargaining in good faith. We are outraged that this company would further expand its use of low-wage subcontracting. It’s a slap in the face to more than 4,300 IAM Local S6 shipbuilders who have worked through a pandemic and for generations to make this company successful.”

Bath President Dirk Lesko defended the search for new, non-union workers in a July 2 letter to employees obtained by Breaking Defense. “Even during the strike, we have a job to get done for our Navy customer,” he wrote. “Even before the strike, the impact of attrition and COVID-19 had driven our manufacturing staffing more than 500 people below what was needed.”

Lesko said the company has the right to bring in help to keep the work on the ships flowing, citing an incident over the winter then it took three months to work through a joint process between the company and the union to bring in local contractors to shovel snow. “Assigning shipbuilders to shovel snow when the U.S. Navy is waiting for destroyers doesn’t make sense,” Lesko wrote.

The search for workers is likely to take weeks, and appears to signal that management believes the work stoppage could continue for some time.

The decision to start looking for help at the yard to buttress the 2,500 employees still working comes at a critical time for the company, as it tries to speed up work on seven Navy destroyers under construction at the sprawling yard. The ships are already about six months behind schedule, shipyard management has acknowledged. With more Arleigh Burke work slated for the coming years, any further delays would affect not only the Navy’s schedule, but the company’s ability to attract future work.

The local union, part of the larger, International Association of Machinists and Aerospace Workers, met today with a federal mediator. Bath management is scheduled to meet the mediator later this week.

The two sides broke off contact last month, and have remained deadlocked on the issues that sparked the strike in the first place.

The primary issue between the union and the company isn’t pay — the union was offered annual 3% raises for the next three years. The sticking point remains the use of non-union contractors to do some work at the shipyard, a situation General Dynamics CEO Phebe Novakovic said in a letter to Martinez last month doesn’t affect the company’s support for the union.

The work stoppage comes as more bad news for the GD-operated shipyard. In April, the company lost the bid for the $795 million contract to build the first 10 of a new class of guided missile frigates when Wisconsin-based Fincantieri Marinette Marine received the award. The company also failed to land the award to build the Coast Guard’s Offshore Patrol Cutters in 2016.

The Navy is also under pressure to get ships out of dock and out to sea.

Last month the service conducted an emergency call-up of 1,600 Reservists to work at the Navy’s four public shipyards to backfill some of the 50,000 workdays a month the yards are losing during the COVID-19 crisis. Navy officials have focused on repairing and refitting nuclear-powered aircraft carriers and submarines, two critical assets in confronting Chinese and Russian activities from the Arctic Circle to the South Pacific. The reserve call-up, the largest in the Navy’s history, could last as long as a year to ensure that critical work on those platforms gets done.

On the destroyer side of the house, the Navy has awarded contracts for 89 Arleigh Burke-class destroyers, 47 to Bath and 42 to Huntington Ingalls. Of those, Bath has delivered 36 ships, and Huntington 32, pointing to years of work ahead for the Bath shipyard.