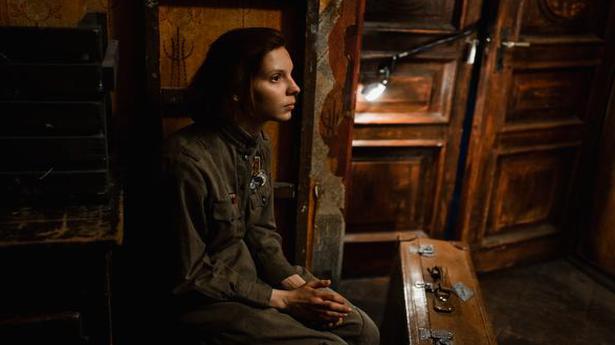 A toddler, Pashka, is facing more than a dozen convalescing soldiers in a hospital ward, who were once fighting on the frontlines of World War II. Some are with fractured heads, others with missing limbs. They look at the kid with utmost curiosity and hope — he is a human conceived during the war and is completely unable to understand the devastation that surrounds them. Pashka stares at the men blankly, mildly amused. One imitates a pig, another flaps his amputated arm like a bird to entertain the kid. They surround him, coaxing him to bark like a dog. Pashka has perhaps never seen a dog before, in his short life, lived in the confines of war. They start to bark in unison, and the kid follows, barking away even when he goes back home. This scene in Russian filmmaker Kantemir Balagov’s riveting sophomore film, Beanpole, is symbolic of the confluence of the past and the future, with both struggling to make sense of each other, unable to communicate but fully cognizant of their interdependence.

It’s 1945 Leningrad and the war is over, yet the past is spoken of in the present. The survivors are incapable of envisioning a world where their lives are not governed by external forces. Healing is accompanied by freedom, but there is a searing inability to get accustomed to it. War, in the film, is like a phantom arm — its absence is acknowledged but rarely felt. With utmost visual sophistication and a firm grip over his craft, Balagov presents a rather rare World War II film, which finds a profound sense of drama in subtlety and silence. The slowness of movements, action and reaction is powerfully dramatic — the dullness of light, the hollow gazes, stoic looks and piercing silences. In Beanpole, when nothing is happening, everything is happening.

Finding inspiration in Svetlana Alexievich’s remarkable 1985 book, The Unwomanly Face of War — in which the Nobel prize-winner chronicles oral histories of Russian woman during World War II — Beanpole, is among the few films that look at post-war through the eyes of women, and has a sharp and critical point of view. The film dismantles the oft-romanticised post-war liberation by the Allied forces and triumph against the Nazis, while not wallowing in devastation but finding poignancy, melancholy and poetry in it. There is a fine line between tragedy and trauma porn, and the film manages to straddle the line deftly by focusing equally on emotions, characters and the mise en scène, and beautifully executing the age-old adage of storytelling: show, don’t tell.

Right from the opening scene, where Iya aka Beanpole (Viktoria Miroshnichenko) is paralysed momentarily and is convulsing, almost frozen, to a scene where her friend Masha (Vasilisa Perelygina) has donned a bright emerald dress and is twirling to escape her trauma momentarily, Balagov’s compositions and the use of saturated colours emote as much as the actors do. A war-torn Leningrad is brought alive through crumbling infrastructure, claustrophobic homes, basic utilities, worn-out clothes and a lack of food. There’s nothing grand about the setting but the detailed mise en scène and dexterously tight frames and expansive tracking shots give us the impression of grandiosity and posits the film in the league of a lavish period drama.

Beanpole would not have had an impact without the finesse of its two leads Miroshnichenko and Perelygina. While Perelygina has the luxury of emoting and expressing freely, Miroshnichenko relies on introspection and haunting blankness, without delivering a flat performance. I had first watched Beanpole at the 50th International Film Festival of India in Goa last year, where I spoke to Miroshnichenko about the interpretation of her character in her debut film. Hot on the heels of getting nominated for the prestigious European Film Awards, along with the likes of Olivia Colman (The Favourite) and Trine Dyrholm (Queen of Hearts), she told me that the key to playing Iya was to internalise the “war within”, which one carries for the rest of their life. Her performance as Iya, even in moments when the camera obfuscates her face, compels you to travel inwards with her, to hypothesise the whirlwind of trauma that is contained within, without her delivering emotions that one would expect.

The film lends itself to an elaborate queer reading of Iya’s relationship with Masha — the unsaid desire and intimacy of shared trauma and hopelessness. The two women, in their newfound loneliness, find solidarity in each other, as they navigate a post-war world, the desire for motherhood and companionship. In one of the most striking scenes, Iya is having sex with an older doctor as Masha is lying next to her. The purpose is purely to bear a child for Masha, who is rendered infertile during the war. Their co-dependence, shared trauma and willingness to forge a common future and find a semblance of normalcy, in many ways, redefine the way we’ve looked at women at war, even long after the battle is over.

Previous article‘What Are The Odds?’ movie review: An uptight teen drama
Next articleKerala gives a push for tuber cultivation during COVID-19 lockdown