Beyond axone: a look at the fermented foods of Northeast India 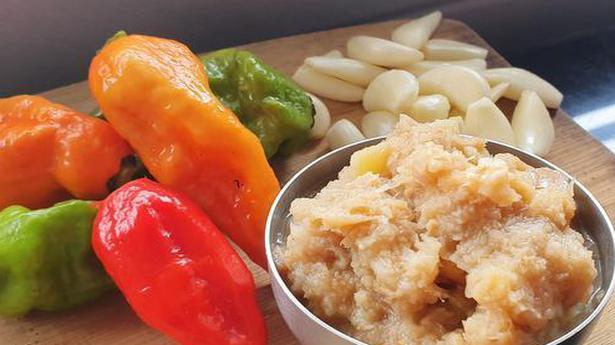 ‘Axone’, available on Netflix, has left most movie-watchers seeking the answer to one question — ‘what was the storyline about?’ Storyline, script aside, it is the title has got everyone talking about axone (pronounced ak-hu-ne). Many want to know more, and the adventurous ones want a taste.

But while akhune is unique to Naga cooking, fermented bamboo shoot is widely used in the entire Northeast region. Local cuisines boast of unique ways in which fermented bamboo (baah gaaj in Assamese; bastanga in Naga and soidon, soibum in Manipuri ) and cane shoots are used. Characterised by its unique pungent aroma, fermentation alters the quality and feel of the shoots and lends it a totally different texture and appearance.

Says Guwahati-based home chef Sanjukta Dutta, “After it is fully fermented and ready, the bamboo shoots become mushy and delectably tangy. It is such a versatile ingredient that the mention of khorisa tenga to the people of upper Assam will have them recollect the taste and flavours of dishes like khorisa tenga maas bhaja (fish fried with fermented bamboo shoot), khorisa kukura (chicken stew with bamboo stew) and khorisa tenga ulkosu pitika (tangy fermented bamboo with mashed yam) doing a time lapse in their imagination.”

Sometimes, a portion of fermented shoots are sun-dried for storage. Does it alter taste? “Slightly. Especially with the look and fragrance,” says Sanjukta.

A significant fermented food enjoyed by the Assamese is kharoli. “Kharoli is fermented mustard seeds. When fully fermented it gives a wasabi-like pungent kick and is best enjoyed as a side dish with poita bhaat (leftover rice fermented overnight),” explains Guwahati-based Chef Atul Lahkar, who also worked with Chef Gordon Ramsay during the latter’s travel to the Northeast a couple of years ago.

Executive chef-partner Thomas Zacharias of The Bombay Canteen says, “Akhune or axone made from fermented soybeans is one of the key ingredients used in Naga cooking which gives the cuisine an unexplainable unique flavour and differentiates it from neighbouring cuisines. I was fortunate enough to sample different variations of akhune during my ‘Chef on the Roadtrip’ in Nagaland two years ago.” Akhune is an ingredient and not a name of a dish. Such is the intrigue over it now that Chef Zac even explained the process in a detailed Instagram post. He wrote, “The boiled soybeans are drained in bamboo baskets and undergo a first stage of fermentation. Some gentle mashing before it is wrapped in banana leaves and allowed to ferment over the fireplace a second time. The resulting mash is intensely aromatic and super rich in umami: that delicious, toothsome flavour profile found naturally in ingredients like truffles and seaweed. The Nagas use akhune in a variety of chutneys, pickles and stews, and most notably, in the incredible smoked pork with akhune. At the Angami home in Khonoma, we witnessed it being added to the yam stem and wild basil curry, simple unassuming stew with the most complex of flavours thanks to that funky, flavour bomb.”

According to Chef Zac, “The origins of fermentation in Nagaland could be attributed not just to a need for preservation but also perhaps to compensate for the unavailability of salt as an ingredient here. The enhanced ‘funky’ taste as a result of the fermentation adds beautiful layers of flavour to the dish which mimics the effect of salt… The Nagas ferment close to 150 different types of products, each with their own flavours and nutritional benefits.”

Chef Achung of Northeast Kitchen in Hyderabad says, “Apart from akhune, Nagas also make anishi — fermented yam leaves. Once fermented, it is cooked with with pork and considered a delicacy. To make anishi, yam leaves are stacked and wrapped in banana leaves. The leaves are left to turn yellow. After the fermenting process is over, the leaves are ground into a paste with salt, chilli and ginger and made into cakes which are again dried over the fireplace or in the sun.”

He adds, “Fermentation is one of the oldest methods of preserving food and enhancing taste. The food science behind fermentation is that it promotes growth of beneficial bacteria known as probiotics and is believed to improve digestion and boost immunity.”

It is not only the people of Nagaland who are into fermentation. Fermented food of the Meiteis, inhabiting the valley area of Manipur, consists of fermented bamboo shoots, fermented fish (ngari, hentak and utonga kupsu), fermented soybean known as hawaijar, and fermented mustard seed/rapeseed (consumed by the Chakpa clan) known as hanggam maru hawaichar. Pune-based Manipuri blogger and home chef Pushpita Aheimbam explains, “The process of preparation is passed down from generation to generation. Hentak is fermented fish paste made with a mix of locally found river fish which are sun-dried and powdered with an equal quantity of sun-dried petioles of hongu/alocasia macrorrhiza/giant taro as well as at times a local variety of small onion (meitei tilhou). The mixture is kneaded into small balls and kept for fermentation in an earthen pot for 15 to 20 days. Traditionally, it’s consumed during the postpartum period (three months) as an alternative to ngari. Hentak is not produced in large quantities unlike ngari. There is also Utonga Kupsu that is somewhat similar to hentak. It is consumed by the Meitei community of Cachar district, Assam.”

Sinki, consumed in Sikkim, is made from fermented radish taproot which is found in abundance in winter. After fermentation, the food comes out as a mass which is cut into small pieces and sun-dried for three to five days. It can be stored for up to two years at room temperature giving it periodic exposure to sunlight.

Gundruk, popular with the Nepalis, is made with mustard leaves or lai pata and cauliflower. Tungrumbai is prepared by the Khasi people of Shillong and Jaintia hills. Like axone, tungrumbai too is prepared from soyabeans. It is one of the most common sources of protein in the diet of the Khasi people, consumed as a side dish with rice.

So, the next time you discuss food of the Northeast, you will have more to talk of than alu pitika, momo and chowmein.