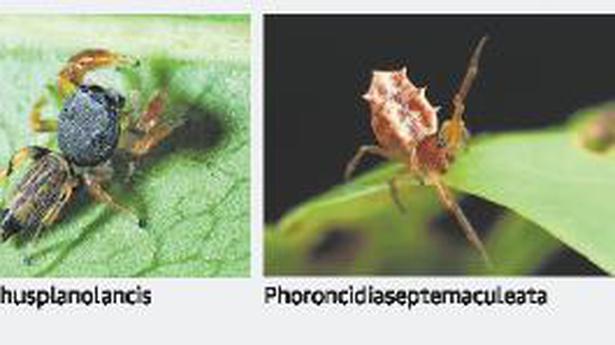 A research team of the Centre for Animal Taxonomy and Ecology (CATE), Christ College, Irinjalakuda, has discovered three new spider species from Wayanad and two from Muriyad during biodiversity exploration.

Two of the species found in the Wayanad stretch of the Western Ghats come under the genus Marengo — Marengo zebra and Marengo batheryensis — are small-sized jumping spiders.

“Discovery of the two species from the Western Ghats region is zoogeographically important because of the presence of another species under this genus in the Himalayan valley. This supports Satpura Hypothesis, a theory dealing with the migration of biotic (fauna) elements from the Himalayan region to the Western Ghats through the Satpura ranges,” said A.V. Sudhikumar, Senior Assistant Professor & Research Supervisor, CATE.

Asemonea cristata is the other spider species discovered from Wayanad. This jumping spider species is characterised by dark males and white females that construct small retreat with silk threads under green leaves.

Piranthus planolancis, a member of the jumping spider family, a new report from the paddy fields of the Muriyad region, is an important biological control agent that feeds mainly on insect pests of paddy. Another new species from the Muriyad kole fields is Phoroncidia septemaculeata, a member of the orb web spider family. This nocturnal species is characterised by thorny projections from the sides of abdomen.

The study was headed by Sudhikumar A.V. and accompanied by Wyne P. Maddison from the University of British Columbia, Canada; Suresh P. Benjamin from the National Institute of Fundamental Science, Colombo; John Caleb, Zoological Survey of India, Kolkata; and research scholars Sudhin P.P, Nafin K.S., and Sumesh N.V. from CATE.

The findings were published in international scientific journals Zootaxa, Arthropoda Selecta, and Peckhamia.