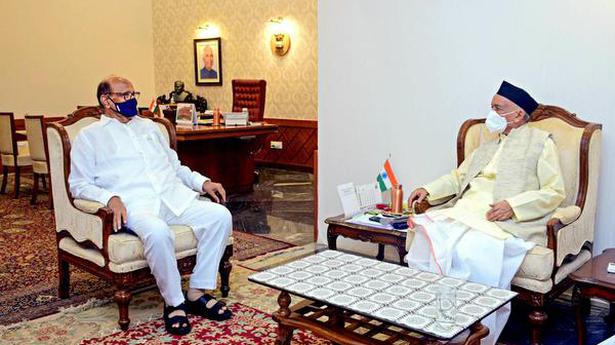 “These universities are holding examinations online. Even IIT Delhi is set to conduct online exams. Our education pattern is different from that of foreign countries. We have the final paper of 100 marks, and therefore, not holding the exams would go against the merit of students,” BJP leader and former higher and technical education minister Vinod Tawde said.

The BJP’s reaction comes a day after Mr. Pawar snubbed Governor Bhagat Singh Koshyari over his interference in the State government’s decision to not conduct the final year university examinations.

Mr. Tawde referred to the NCP chief’s statement at a press conference in Ratnagiri’s Dapoli town on Wednesday, where Higher and Technical Education minister Uday Samant was present.

“A number of well-known universities in India, foreign universities like Oxford, and many private universities have cancelled examinations. If private universities too are taking a similar decision, then I do not think any such decision taken by the State government is wrong. Honourable Governor may have more knowledge in this subject and that’s why he must be saying differently,” Mr. Pawar had said.

Mr. Tawde said he does not believe that the NCP chief was misinformed about Oxford University. “It is intriguing to know what purpose Mr. Pawar wants to serve by giving wrong information and safeguarding a minister at fault,” he said.

Chief Minister Uddhav Thackeray has already announced that the final year examinations will not be conducted owing to the COVID-19 pandemic and has even offered an option of appearing for the exams in October to those who may want to improve their grades.

For others, average marks or grades of last seven semesters will be given as final score. The State has been saying that holding the examinations for a few lakh students by maintaining physical distancing will not be possible and students could be exposed to the threat of the virus.

Mr. Koshyari, along with Rashtriya Swayamsevak Sangh-affiliated Akhil Bharatiya Vidyarthi Parishad is against the decision, with the Governor hinting that it is his domain to take the final call.