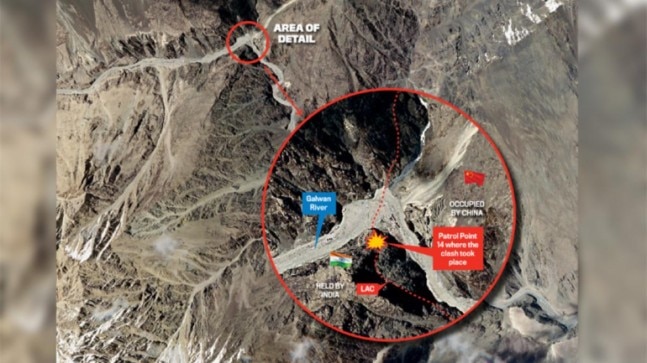 On Monday, June 15, it seemed like the stand-off with the Chinese PLA (People’s Liberation Army) in eastern Ladakh was drawing to a close. Nine days earlier, commanders from both sides had held a first-ever meet at the Moldo border post opposite Chushul in Ladakh, and the Chinese, according to the Indian army, had agreed to pull back in the Galwan Valley.

That evening, a group of soldiers from the 16 Bihar Regiment camped in the valley went to verify whether the PLA had indeed withdrawn from Patrol Point 14, a spot on a ridge above the valley which the latter had occupied since early May. This was the point in the valley on India’s side of the LAC to where border patrols usually walked up to and returned.

Like all the ridge positions in the valley heights at between 14,000-16,000 feet, one army officer says, this one too can be accessed only by a narrow foot trail barely wide enough for two people to walk abreast. An altercation broke out after Indian sol­diers began dismantling a tent built by the Chinese. It rapidly escalated into fierce hand-to-hand combat when hundreds of PLA troopers rushed in brandishing their new melee ‘weapons’-iron rods and clubs studded with nails designed to penetrate multiple layers of high-altitude clothing and inflict grievous bodily harm. Twenty Indian soldiers, including commanding officer Colonel Santosh Babu, were killed in the savage scuffle.

Several soldiers, it is believed, fell to their deaths from the heights after sustaining serious injuries. Others died of injuries aggravated by hypothermia, the extreme cold impeding blood circulation to the brain and chest. Ten soldiers held by the Chinese were released after major-generals from both sides met on June 18. The Indian army believes an unknown number of casualties were caused on the Chinese side too, but these could not be independently confirmed.

Defence analysts warn the incident could lead to further clashes along the LAC, especially at other points in eastern Ladakh where the Indian army wants the Chinese soldiers to disengage. “The next time, even the Indian troops might carry batons and sticks and will not be surprised by the Chinese side,” says Major General Vinaya Chandran (retired).

The Galwan Valley skirmish is the bloodiest since 1967 when the Indian army unleashed a ferocious artillery bombardment at the Nathu La and Cho La passes in Sikkim, killing over 300 PLA soldiers. It has the potential of escalating into anot­her border clash, particularly after Prime Minister Narendra Modi suggested what could be interpreted as retribution in a June 17 video-conference with state chief ministers: “The sacrifice of our soldiers will not go in vain.”

Were Indian soldiers unarmed? This question ricocheted around the country, picked up by political parties which accused the government of sending soldiers in unprepared. Foreign minister S. Jaishankar clarified on June 18 that the soldiers were armed. It is quite possible that not all of them were and the peculiar reason for it is buried in the confidence-building measures (CBMs) signed by the two sides on November 29, 1996.

Article VI of the CBMs, which is aimed at ‘preventing dangerous military activities’ along the LAC, explicitly prohibits both sides from opening fire at least two kilometres from the LAC. The CBMs also detailed what was to be done in case rival patrols came face to face with each other-they were to walk back to where they came from. Firearms are never brandished-the drill is for rifles to be slung on the back with the barrel pointing towards the ground. This is because, as an army officer says, “even a soldier holding a rifle in his hands can appear threatening”.

In 2020, the PLA cannily chose to circumvent these restrictions by employing its studded clubs to kill and maim without firing a shot. Yet, its actions in planning and executing multiple incursions along a 180-km front of the LAC shredded Article I of the 1996 CBM-‘No armed forces deployed by either side in the border areas along the Line of Actual Control as part of their respective military strength shall be used to attack the other side, or engage in military activities that threaten the other side or undermine peace, tranquility and stability in the India-China border areas.’

In the Galwan Valley, commercial satellite images taken less than a day after the face-off showed dozens of PLA 10-tonne general utility trucks parked ant-like single file along the narrow riverbed. “They stabbed us in the back,” says an angry army officer. There were multiple reasons to believe the May 2020 incursions were out of the ordinary. On May 5, the PLA had intruded in multiple spots along the LAC with India. The intrusions were unusual for their numbers. Now, the army knows this for a fact at Pangong Lake where PLA posts are blocking Indian soldiers from patrolling the LAC up till their perception line and in the Galwan Valley which China now claims in its entirety.

How did the Indian army miss the incursions? The PLA camouflaged their moves under a routine annual summer exercise. The exercise began in January and grew into a full-fledged deployment along the boundary with India that saw the over a division of soldiers stationed all along the LAC. “The PLA vehicles and personnel kept moving in and out of the Tibetan plateau and, before we knew it, they had moved towards the border,” says an army official.

Echoes of India’s short and sharp 1962 border war with China still ring in the Galwan Valley. The 80-km river originates in the disputed Aksai Chin and twists serpent-like before joining the Shyok river in Ladakh. Most of the river and its valley lie on the Chinese side and this location was among the first moves of the ‘Forward Policy’ ordered by the Indian government in November 1961. ‘The Galwan Valley appeared on the Indian Army HQ’s maps as one of the best routes along which troops could move into Chinese-held territory,’ the late journalist Neville Maxwell wrote in his 1970 book, India’s China War. ‘The track through the valley was in fact extremely difficult and the Chinese had a post at the head of the valley, Samzungling, since at least 1959.’

On July 10, 1962, the PLA came up to an Indian Army post established in the valley, but later withdrew, briefly leading New Delhi to believe its ‘Forward Policy’ was working. On October 20, the Galwan Valley post was overrun by the advancing Chinese, leading to the deaths of 33 Indian soldiers.

Fifty-eight years later, a burst of Indian road construction has exacerbated the PLA’s vulnerabilities. One of the PLA’s major objections was to a lateral road being constructed from the 260-km Darbuk-Shyok-Daulat Beg Oldie (DSDBO) road completed last year. The strategic DSDBO road, with its multiple bridges, links the capital of the Union territory Leh with the army’s northernmost outpost, Daulat Beg Oldie (DBO), just below the Karakoram Pass. The road halves the time taken to drive from Leh to DBO, from a week to just three days. The lateral road and a bridge over the Shyok river would allow Indian soldiers to swiftly access the patrol points near the Galwan Valley.

India is contesting China’s claim on the valley. A complete Chinese occupation would not only alter the LAC, it could allow China to block the crucial DSDBO road-the only means of sustaining the army’s presence in sub-sector north, a wedge of territory between the Karakoram range and the Shyok river.

The brutal violence of June 15 has led to a tectonic shift along the LAC. The same day, the Chinese foreign ministry spokesperson claimed the whole of the valley and accused the Indian troops of intruding. “From a disputed unsettled border, it has become a contested border. This is a very big shift,” says Lt Gen. Vinod Bhatia (retired) who heads the defence ministry think-tank, Centre for Joint Warfare Studies (CENJOWS).

In 1999, the Pakistani army sneaked in to occupy the heights at Kargil until they were beaten back and the heights were recaptured by the Indian army. The comparisons between the ongoing stand-off in Ladakh with the Kargil War seem apparent. But there are differences. The Line of Control (LoC) with Pakistan was jointly surveyed and agreed upon by both countries under the Simla Accord signed on July 3, 1972. It was delineated on 19 maps, signed by military officials and formally exchanged on December 11, 1972.

The LAC has not been demarcated. The only attempt to exchange maps in the Western Sector, in 2003, ended after military officials from the two sides briefly exchanged maps, but then the Chinese side took theirs back. Indian officials say the Chinese authorities have used this ambiguity to constantly push forward their claims in Ladakh. The strategic aim, according to one army official, seems to be a salami-slicing plan, push India as far possible to the west of the Shyok river (which is on the Indian side) and away from China’s strategic road linking Tibet and Xinjiang passing through Aksai Chin.

A contested border works very well for the PLA. The patrols of India and China first came in contact after the PLA invaded and annexed Tibet in 1950. Until then, India did not share a land boundary with China. Ever since then, army officials say, the PLA has been creeping westwards into the harsh and remote high-altitude desert, first swallowing Aksai Chin, then occupying parts of Ladakh during the 1962 war and then nibbling at the territory over the years, thereby altering claim lines. India’s response has been to accelerate the completion of its border roads.

Nearly 73 strategic roads recommended by the China Study Group in 1997 are now nearing completion over two decades later. These roads and a robust military presence on these borders could well be the answer to resolving India’s Himalayan imbalance.