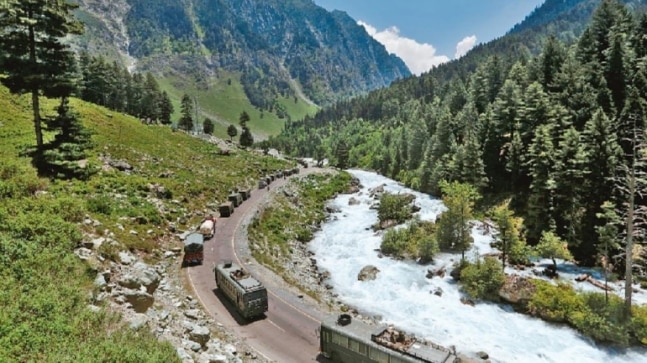 in a record time of three months, the Border Roads Organisation has replaced a bailey bridge which could only be used for 24 tonnes vehicles with the new one which can be used by vehicles up to 70 tonnes.

The BRO looks after the 1,200 kms of the LAC in Ladakh sector along with China. (File photo: India Today)

Improving connectivity to the border with China, three new bridges have been built by the Border Roads Organisation (BRO) close to Leh in Nimu, which allows movement of tanks and heavy vehicles right up to the front.

Visiting the bridge in Nimu, where Prime Minister Narendra Modi had visited recently, India Today saw that in a record time of three months, the BRO has replaced a bailey bridge which could only be used for 24 tonnes vehicles with the new one which can be used by vehicles up to 70 tonnes.

Prior to January this year, C-17 heavy lift aircraft and Ilyushin-76 transport aircraft were mainly used by the Army to ferry tanks from lower formations to the Ladakh region mainly due these three bottlenecks on the road. “This bridge is at kilometre 397. Earlier, there were three bottlenecks at kilometre 362, 361 and 397. This bridge has been constructed in record time of three months. On the request of the Army, we made a 50-metre long steel structure bridge which can carry any sort of load,” BRO Executive Engineer B Kishan told India Today.

“This is an R-70 class bridge (which can be used by vehicles up to 70 tonnes) and it can take any sort of load to the forward posts,” he said.

The team next reached the second bridge at the Basgo location near Nimu, which has again been rebuilt and would be ready to be used in next few days by the heavy vehicles including trucks towing artillery guns and tank boat vehicles. BRO officials said earlier, they had stopped the flow of the small Nala flowing below the bridge to allow the movement of the heavy vehicles from the side of the under-construction bridge.

The third bridge is built at a place called Ule Topo which is further ahead on the SrinagarLeh highway from where the armoured vehicles are brought by road.

The BRO looks after the 1,200 kms of the LAC in Ladakh sector along with China and over 250 kilometre of Line of Control and Actual Ground Position Line with Pakistan. BRO also maintains the air fields in Leh, Daulat Beg Oldi, THOISE and Kargil which are crucial for maintaining connectivity with forward posts and towns.

IndiaToday.in has plenty of useful resources that can help you better understand the coronavirus pandemic and protect yourself. Read our comprehensive guide (with information on how the virus spreads, precautions and symptoms), watch an expert debunk myths, and access our dedicated coronavirus page.
Get real-time alerts and all the news on your phone with the all-new India Today app. Download from
Previous articleWoman Allegedly Shot At By Husband During Heated Argument In J&K: Police
Next articleDoreen Lawrence recalls being stopped by police shortly after son’s killing