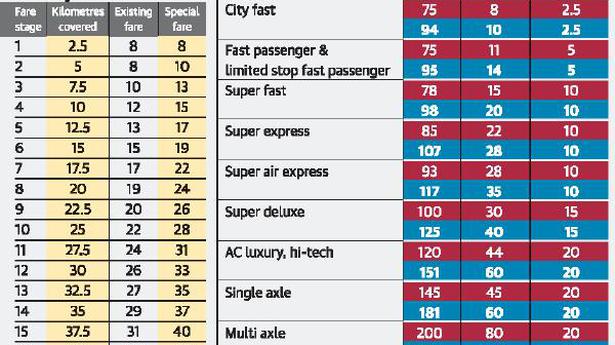 The ‘COVID special bus fares’ of ordinary and super-class buses in the State will come into effect in two days with the Cabinet giving the nod on Wednesday.

As educational institutions are remaining closed, fares for students have not been hiked as recommended by the M. Ramachandran Fare Revision Committee.

The minimum fare of ordinary buses has been retained at ₹8. The distance that can be travelled for the minimum fare has been reduced from 5 km to 2.5 km. For every subsequent km in the 16 fare stages of the ordinary buses, the fare will go up by 90 paise as proposed by the committee. One travelling 40 km (fare stage 16) on ordinary buses will have to pay ₹42 as per the new fare instead of the prevailing ₹33. The existing bus fare for fare stage two onwards is 70 paise per km.

In the super-class services, the minimum fare is ₹10 in city fast for 2.5 km, ₹14 in fast passenger and limited stop fast passenger, ₹26 in low-floor AC for 5 km and ₹100 for 20 km in multi-axle buses. For subsequent km on these classes of buses, the fare varies from 90 paise to ₹2.50.

Transport Minister A.K. Saseendran said the fares would come into effect within two days as it had to be notified and formalities had to be completed by the Kerala State Road Transport Corporation (KSRTC) and private bus operators. The four-member committee, comprising transport expert T. Elangovan, finance expert N. Niyathi and State Transport Commissioner M.R. Ajith Kumar as member secretary, submitted the report to the government on Thursday. It had recommended the hike taking into account the losses suffered by the KSRTC and private bus operators due to the physical-distancing norms and poor patronage following the pandemic, the hike in price of high-speed diesel and increase in tax and insurance for buses.

The government had increased the minimum fare to ₹12 in May but reverted it to ₹8 when passengers were allowed in all seats. The private bus operators sought legal remedy against the decision and the High Court of Kerala directed the committee to submit the report in four weeks.