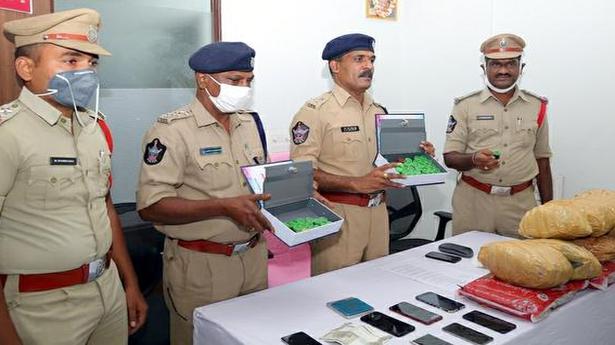 The Guntur Urban police unearthed a liquid ganja (cannabis) racket, which has links to tribal villages in Visakhapatnam district, and arrested eight students in this connection.

The Old Guntur police, who are investigating the case, seized about 50 bottles of the banned liquid, each measuring 20 to 50 ml, a digital weighing machine, ₹30,000 cash and eight kg of ganja from the accused.

“We are trying to find out the place where it is being made, the kingpin of the racket, suppliers and any other persons involved in the activities,” said Guntur Urban Superintendent of Police R.N. Ammi Reddy.

The arrested included students of engineering, pharmacy, management, B.Sc and Intermediate of various educational institutions in Guntur, the SP told The Hindu on Sunday.

Acting on a tip-off that liquid ganja was being supplied to students, a team led by Deputy Superintendent of Police (ESP-East) B. Sita Ramaiah and CI R. Suresh Babu picked up two persons. Based on their confession, the police team rounded up alleged supplier Korra Podilam and the other gang members.

“The accused were selling the substance in 10 ml to 50 ml bottles, with the latter priced at ₹3,000 apiece,” Mr. Ammi Reddy said.

Korra Podilam of Vangasara village in Chintapalli mandal of Visakhapatnam, who completed B.Sc, had been supplying the banned drug to the gang, the SP said.

A team of about 10 police personnel busted the racket and made the seizures. The accused would be produced in the court, Mr. Ammi Reddy said.

“This is probably the first time we have seized ganja liquid in such a quantity. Instructions have been given to step up vigil at educational institutions,” the SP added.