‘Chaavunadappaattu’, written by Anvar Ali and sung by John P Varkey, is an anthem for migrant labourers 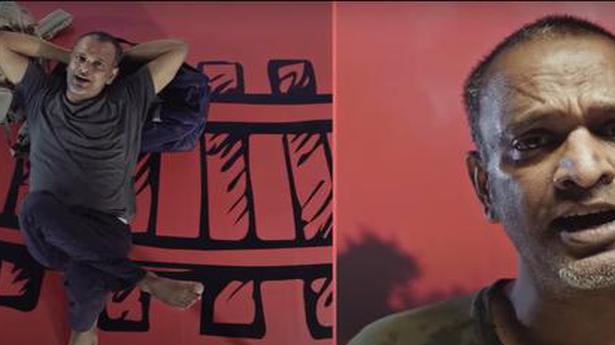 When India went into a lockdown on March 24, the nation saw migrant labourers walking to their homes, hundreds of kilometres away. Heart-wrenching videos and images of exhausted men, women and children walking on dusty roads painted a grim picture. Accidents, starvation and stress killed some of those before they even reached their destination.

Their plight moved poet-lyricist Anvar Ali and he reached for the pen when he read about 16 labourers mowed down by a goods train while they were sleeping on the railway track. ‘Chaavunadappaattu’ (Death-walk Song) is a music video of the poem composed by Dawn Vincent and sung by John P Varkey. Released last week on YouTube, the video has been produced by Collective Phase One, a forum comprising filmmakers, technicians and artistes, and Uru Art Harbour, Mattanchery, Kochi.

“When I saw them walking to their homes, I felt a rage burn in me. We, middle-class India, make these people do everything; they build our homes, cities, infrastructure…. But one day we disown them and ask them to look after themselves. Socio-political policies of various governments have always been for the middle class. The words were born in a crucible of disappointment and self-reproach. It is an instance of ingratitude in the history of our democracy,” says Anvar.

He adds that the song took off when he came across a cartoon published by R Prasad after the workers were run over by the train. “It said: ‘India lives in its villages, works in its cities and dies somewhere in between!’ See the irony of the situation. Railways is our pride, a symbol of our nationalism; it has been the only means of mobility for these labourers when they moved from their villages to the cities. When these trains stopped, they decided to walk through the same tracks thinking it would safely take them home. But see what happened,” muses the poet.

Since he was particular that it should be made into a music album, he shared the concept with the team at Collective Phase One and thus the project materialised. Dawn says that it was cinematographer-director Rajeev Ravi, one of the founders of the Collective, who asked him to work on it. “We wanted it to be a hard-hitting, haunting track, meant to connect with the nation’s conscience. That’s why it comes with subtitles in English and Hindi,” says Dawn. Poet and political commentator Varun Grover has written the Hindi subtitles.

The sound designer-composer, who has worked in films such as Kammattipaadam, Eeda, Kismath and Trance, adds that the song can’t be put into any particular genre. “It has the metre of vadakkanpaattu (ballads of north Malabar). But we broke that and gave it a different sounding. It had to sound like an anthem of pain and protest. The chorus and voice of the crowd were meant to create that impact,” says Dawn.

Anvar, who has worked with John in Kammattipaadam, says that it was the singer’s powerful voice and high-pitched rendition that took his verse to a different level. John, a member of the band Jigsaw Puzzle that later evolved into Avial, has been featured in the video shot at Uru Art Harbour. The four-minute song also has footage of exhausted labourers and their families from different parts of the country on their tiring journey back home by foot. The project has been conceptualised by Prem Shanker, director of Randu Per screened at the International Film Festival of Kerala (2017).

Previous articleAKC Natarajan: A decades-old bridge between the clarinet and Carnatic music
Next articleSurviving on a bag of rice: plight of Bangladeshi garment makers