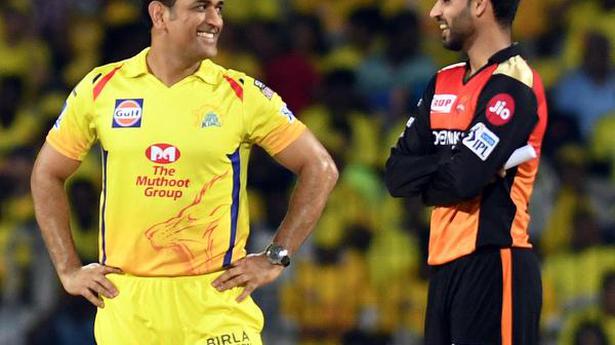 “Chennai Super Kings usually reposts fan-made works on social media. My friend and I had jammed, and we pitched it (the song) to them,” says Chennai-based independent singer-songwriter Vajahath Ali. The result of that pitch was released this evening on the IPL team’s social media handles: an official video celebrating Chennai Super Kings captain Mahendra Singh Dhoni’s birthday, with the soundtrack created by Adil Mohammed and Vajahath Ali.

This video illustrates Dhoni’s career — both in national colours and with Chennai Super Kings. It has moments right from his debut with the Indian team and his Ranji Trophy days to right now.

The track is soft and soothing, with almost-crooning vocals: surprisingly different from what one might expect when thinking of a sportstar’s action-packed career. The lyrics, of course, are pure adoration. “I have been following cricket since my childhood, and Dhoni is one of my absolute favourites. His jersey number — seven — is also my lucky number,” says Vajahath.

Adil, on the other hand, is less of a cricket fan and more pure, ardent Dhoni fan. “I only watch cricket when he is playing. I remember going to Crowne Plaza years ago when he was staying there with the team, just to catch sight of him,” he says.

“The song name is ‘Mahi ve’… these were the first words to come up while we were jamming,” says Vajahath over a phone call. Because of Dhoni’s pan-India appeal, it was decided that the lyrics would be a blend of both Tamil and Hindi.

Says Vajahath, “It took five days to complete. Bengaluru-based Smitha Vaideeswaran wrote the Hindi lyrics and we did the Tamil lyrics. Aadil and I did the vocals; I did the guitar; Robin Nithish did the bass. Percussion was programmed; the rest is all instrumental and harmony layering.”

The mixing and mastering was also done by Adil, who is part of the city band Rollinbeat and is active in Chennai’s street music scene.

Adds Adil, “Every song made for CSK, or for any cricketer, tends to have hiphop or a lot of electronic feel to it. We wanted to keep this acoustic, and construct it very simply. So anybody can sing it, and even a beginner-level guitarist can play it.”

Says a member of CSK’s social media team over the phone: “We always encourage fan content: they send us fan emails, DM us about their creatives, songs and videos. If something among it goes with our requirements, then we request some changes to their version. Sometimes, we use their content as it is. But when this song came up, it went so well with the video we had in mind that the two ideas merged into one. The production quality was also very good, so this is not being put out as fan content. It is an official collaboration.”

The song captures the mood of the video well, he says, adding, “to capture the career of someone who has been around since 2004 — for 16 years — is an honour.”

Previous articleSimple tips to make your home monsoon-friendly
Next articleWhat can I do with a glut of broad beans? | Kitchen aide