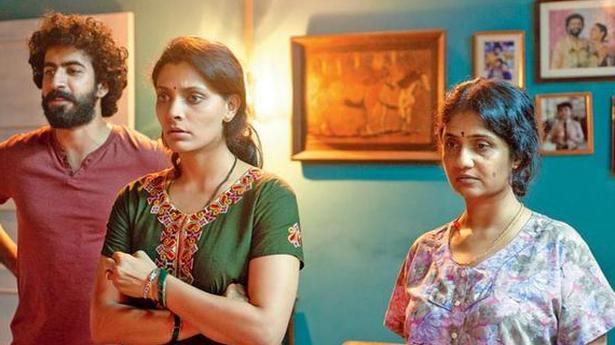 What is it about women actors from Maharashtra? This is not about indulging in regional politics or any kind of a parochial play. Their undeniable virtuosity has been evident in film after film. And, in Choked: Paisa Bolta Hai too, it’s the trinity of Saiyami Kher, Amruta Subhash and Rajshri Deshpande (in a smaller role though) that walks away with the plaudits with their effortlessness. Which is not to discount Roshan Mathew who is just as nuanced in accompaniment.

It’s the well-etched characters and finely tuned performances that are the highlights of Anurag Kashyap’s new Netflix film, a dark slice of Mumbai’s Marathi, lower middle class life that is just as observant of city’s essential “melting pot” culture. So, in a fit of frustration, the couple—bank cashier Sarita (Saiyami Kher) and an out-of-job, carrom-playing, wastrel Sushant Pillai (Roshan Mathew) will easily break into their respective mother tongues. There’s more to the detailing—the kitty party games, the song-n-dance of the mehndi ceremony or the chipped walls and grungy balconies of the homes.

Sarita and Sushant’s marriage story could be that of any struggling couple in Mumbai. Their backstory is deliberately kept as a hazy backdrop. What we see are the results—shattered dreams, thwarted ambitions, unrealised material needs, future responsibilities, Sushant’s unsteady job, growing debt, the woman who rightly wears the pants in the house, a love that is steadily slipping away and life becoming a burden, constantly weighing them down. Will a secret source of unlimited cash keep them going?

So far, so smart. Kashyap sets the tone with a marked cheekiness, whether it’s the bank cashier getting back at a customer when he teases her about counting notes, or Sarita being the recipient of barbs from the sabziwala and plumber. Kashyap is characteristically insolent when it comes to Modi, magical mushroom or the Himalayan sojourn.

There some standout vignettes. Sarita’s chats with her neighbour played by Amruta Subhash, that are as much about unburdening and seeking comfort and sympathy as about squaring up to the nosiness. Most so the heated arguments and confrontations of the couple–whether it’s over a sleeping child on the bed or by the wash basin in the morning while she is on her way to work. Kher and Mathew are in sync right down to he being mostly at the receiving end and she telling him in the morning rush, “Baad mein ladte hain (Let’s fight later)”. Kher comes across as a real surprise in the way she becomes a Marathi mulgi—it’s in the kind of saris she wears, the way she holds them slightly up and how clutches on to her purse in the local. The body language is on point, as are the fleeting expressions of vulnerability, resentment and weariness with all Sarita’s wants.

The lead-up to demonetisation is set-up well. But it’s once demonetisation is announced, that things get chaotic on screen, as they did, ironically, in real life too. Micro-chip in currency notes, Jio, PayTm, achche din—Choked hits at all the obvious targets, which is most welcome, but it does so in an obvious way as though showily scoring sly points. Demonetisation feels more deliberately shoved in, in Choked, rather than the target of a thoughtful, well-embedded and sharp critique. Sarita stands firm as the voice of reason. The stash of cash, the resultant compromises of the uniformally flawed characters and the non-judgmental tone work. But things get too scattered as we hurtle towards the end. And then, they get resolved just as easily and a tad clumsily. In taking on demonetisation the film becomes as disconnected and ineffective, towards the end as demonetisation itself has been.

Although, Choked has been being pitched as a satire on demonetisation, the film stands well on its own, outside of it, as the portrait of a city, its people, the essential greed and avarice and the flaws at the centre of the human condition. The entire film resides perfectly in two recurring shots—a drain pipe that flows over like an oil well and Sarita counting notes. The two images sum it all up most eloquently.

Previous articleHow Hyderabad’s Nori Art and Puppet Centre will keep kids engaged at home amid the pandemic
Next article‘Space Force’ review: Out of space and definitely out of our minds