Citizens’ participation has been the missing link in fight against COVID-19, says Kamal Haasan 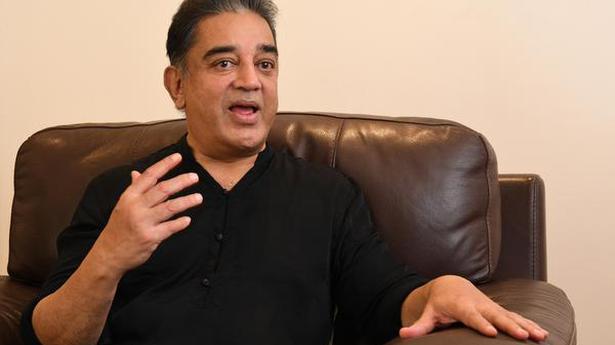 Makkal Needhi Maiam founder Kamal Haasan’s decision to launch a public welfare initiative, curiously titled ‘Naame Theervu’ (We are the solution) on June 4, to tackle COVID-19 has raised many eyebrows. Critics alleged that he was letting the State government off the hook and, instead, putting the onus on the people.

Speaking to The Hindu, Mr. Haasan disagreed with the allegation and said that ‘citizens’ participation was the missing link’ in Tamil Nadu’s fight against COVID-19.

“It is not that volunteers could do what the State government can…but it was the missing link. From the Kerala experience, we have realised that whatever amount of success they had is due to citizens’ participation. They had prior experience, not with a pandemic, but with an epidemic. Our healthcare system is superior to even Kerala’s but in spite of that we are behind – this is because of lack of transparency and lack of engagement with the people by the State government. People got mixed signals from the government,” said Mr. Haasan.

He underlined that ‘citizen participation has been internationally successful’ in controlling the spread of COVID-19. “Cooperation of the people is better than seeking their obedience. There is no use simply criticising the government. State government’s decision to keep Koyembedu market and Tasmac shops open was thoughtless. It is important to be transparent, tell people the numbers and what to do,” he said.

On whether ‘Naame Theervu’ is his response to feeling ‘hopeless’ about the State government’s efforts, he said, “Now, we are realising how the State government is functioning. We need clear plans and transparency but the onus is going to fall on the people. Instead of getting angry and negative, this is a pro-active plan undertaken ‘for the people and by the people’. This is about hope – we can and must overcome this.”

Mr. Haasan added that the experience of coordinating this welfare initiative has shown that people are also on the look out for psychological help.

“We get people requesting all kinds of financial help – the volunteer participation can only do so much and the State government has to step in. After the Tasmac shops reopened, there seems to have been an increase in domestic violence. These were shocking but new learning experiences,” he said.

He identified agricultural and labour sectors as the key areas that the State government should focus to kickstart the economy.

“We have already released a document – Re-imagining Tamil Nadu – which has a table of contents. Finance those sectors and help them instead of striving for ‘optics of the helping hand’,” he said, adding, “Those who had come from outside the State wouldn’t be so keen to come back to metropolises. Doles alone are not enough – governments shouldn’t just think of this as an opportunity to give away freebees,” he said.

Asked about his assessment of the ₹20 lakh crore COVID-19 relief package announced by Prime Minister Narendra Modi, Mr. Haasan said, “I like the numbers – but the numbers alone don’t matter. Like Mahatma Gandhi said, any decision – even the Constitution – must benefit the poorest Indian. Otherwise, it is not a great system.”

He also accused the Centre and the State government of ‘trying to stay in power’ instead of ‘serving the people’.

“Politics is not about coming to power and staying in power. That is personal aggrandisement. The job of the government is to serve the people,” he said. Recently, Mr. Haasan had strongly criticised the custodial deaths of P. Jayaraj and J. Benicks in Sattankulam in Thoothukudi district and his party has approached the courts demanding that independent ‘Police Complaints Authorities’ be set up in State and district level as per Supreme Court’s guidelines.

What was the trigger?

“It was the last straw on the camel’s back, as they say. I have a litany of woes on the same subject. I am not saying there is a connection but why would it happen in the same place which is already sensitive…where only a few years back the police shot dead 13 unarmed people. We should have acted then but we have been slow. So, this time we are not going to fight it case by case, but call for a general reform in police which is long overdue,” he said.

Mr. Haasan blamed successive governments – the DMK and the AIADMK – for ‘neglecting police reforms for their convenience’. “If you keep on emboldening cops by political patronage, this is bound to happen again and again and again,” he said.

Asked why Makkal Needhi Maiam often takes the route of litigation, instead of the more traditional political protests on the streets on many issues, Mr. Haasan defended the use of litigation as a political strategy. “Litigation as a political strategy has worked well for India. More than street violence, it was the litigation we had with the British government that had actually brought them to their logical senses. And that’s what we should do in a world where disputes cannot be settled by violence. MNM will not believe in violent street marches that impedes people’s normal lives and their emergencies,” he said.

However, Mr. Haasan added at the end, “Do expect us on the streets…if push comes to shove, we will be there.”