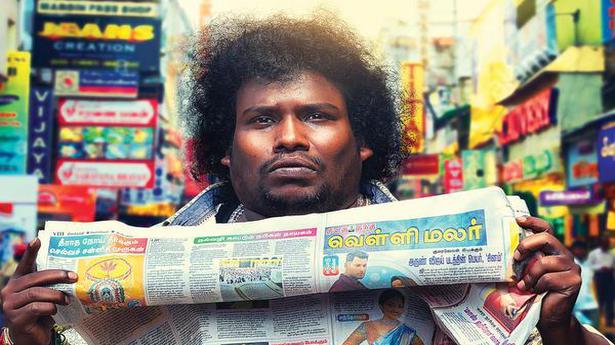 Bartending is an art. Like cooking, fixing a drink requires an eye for detail and experience. There is more at stake if the task is to fix a flawless cocktail.

Yogi Babu’s Cocktail, which its producer had you believe was about a cockatiel bird but isn’t, is not exactly a Bloody Mary. It is more a poorly mixed Screwdriver — the film’s core plot thread is ripped directly from The Hangover films — that it could leave you feeling numb by the end of its 127 minute runtime.

What it is instead is an SOP guide on how best to shoot a film if COVID-19 restrictions limit filming crews to constitute less than 30 people.

At least 60% of the film is shot in a single room with all four of the lead actors present. The remaining scenes happen inside a police station set and the house of an idol thief besides a couple of shots filmed on closed streets.

Cocktail’s story follows four men, the chief being Don (Yogi Babu), who convene for a bachelor party at a friend’s house. They getdrunk and when they wake up, there is a dead woman lying next to Don.

With no memory of the previous night, the quartet proceed to cover up the woman’s death, mistakenly believing that one of them had committed the murder. On the parallel, we see an idol thief attempting to pawn off an invaluableidol to an “international client”. These two plot threads converge at some point and what happens then forms the rest of the story.

Yogi Babu’s brand of humour continues to find takers among the Tamil audience; the actor relies heavily on his ability to fill gaps in screenplay with one-liners (or counterpunches) that he, interestingly, prefers to add during the dubbing stage.

Perhaps having other talented comic performers helps Yogi Babu take a step back at times in Cocktail, a welcome difference from his earlier movies. There is a copious dose of “double meaning” dialogues; some like the references to rape are insensitive and downright despicable but as is the precedent seen before in Tamil films, such content continues to fly.

Yogi Babu also “technically” has a pair. She appears in exactly two scenes, one of which is a song sequence. There are two other women: one is a cadaver, the other is a woman in love with another of the male leads, and whose character arc is limited to a cake-cutting scene, hugging her father and rudely waking up her fiancé after his bachelor night! If ever a piece of content needed to pass the Bechdel test… Cocktail isn’t your choice.

Cocktail missed out on theatres due to the lockdown and has now followed the Ponmagal Vandhal route with an OTT release. Having endured this discomfiting concoction and with the benefit of hindsight, an OTT release is perhaps the best result.

Cocktail is currently streaming on Zee5