‘Congressisation’ of MVA led to killing of sadhus in Palghar, says Smriti Irani 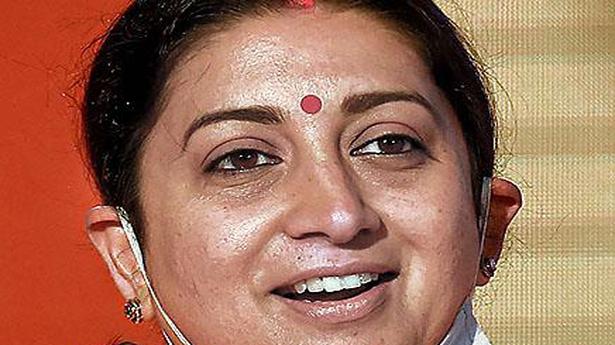 Union Minister for Textile and Women and Child Development Smriti Irani on Sunday said that ‘Congressisation’ of the Maha Vikas Aghadi government in Maharashtra resulted in the mob lynching of two sadhus in Palghar district.

She was addressing a virtual rally for Konkan and Mumbai regions to mark the sixth anniversary of the Central government under the leadership of Prime Minister Narendra Modi. A rumour about thieves working in gangs in a remote tribal area led to the killing of two sadhus in Palghar district two months ago.

“It is painful that Mr. Gandhi speaks in favour of enemy whenever it stands against the country. Some people believe we should never expect him to stand with the Indian forces. It is sad that Chhatrapati Shivaji’s land witnesses a government which stands with China and wants friendship with Pakistan,” Ms. Irani alleged.

She said that she was stunned to know the details of donations given to Rajiv Gandhi foundation, looked after by Sonia, Rahul and Priyanka Gandhi, when the UPA was in power. “When Manmohan Singh was the Finance Minister, he had paid around ₹100 crore to the foundation. Congress-ruled States and some PSUs also made donations. There is no better example of political hafta. Is it the reason why Dr. Singh’s name came up suddenly when discussions about who was going to be the Prime Minister were on?” the minister asked.

Mr. Fadnavis cited the example of Delhi Chief Minister and Aam Adami Party leader (AAP) Arvind Kejariwal, saying the State should learn from him about working along with the Centre. “The Centre is ready to help Maharashtra, but the government is not ready to take it. It is time to work hand-in-hand with the Centre,” he said, adding instead, the ministers from the State are busy blaming the Central government.

Previous articleTales of myth, suspension and violence shine in this multi-disciplinary show
Next articleMercedes to race in black F1 livery in message against racism