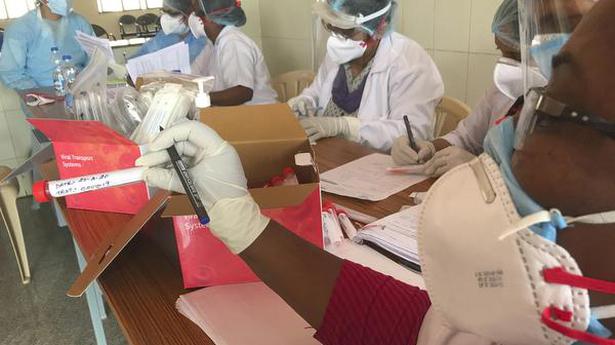 Kerala’s cumulative COVID-19 cases touched 5,204 on Saturday, with 240 new cases, a new high for a single-day.

With 209 persons reported to have recovered on the same day, the State was maintaining the trend of balancing new cases with almost as many cases of recovery. Active cases under treatment in hospitals were 2,129. There were 3,048 recoveries in all.

Cases of local transmission seemed to be rising with new and expanding clusters, and random cases with no epidemiological link.

On Saturday, 36 cases of local transmission were reported, including 11 members of the Defence Security Corps and four CISF personnel in Kannur and four Border Security Force jawans in Thrissur. The rest of the 204 new cases were imported.

Almost all of these scattered cases, in which the source of infection was not traced, were reported in people for whom interactions with a large number of people was a daily occupational hazard. They included lottery sellers, fish vendors, food delivery staff, medical representatives and drivers of public transport vehicles.

Of the new cases, Malappuram had 37, Kannur 35, Palakkad 29, Pathanamthitta 22, Alappuzha and Thrissur 20 each, Thiruvananthapuram and Kollam 16 each, Kasaragod 14, Ernakulam 13, Kozhikode 8, Kottayam 6, Idukki and Wayanad 2 each.

Malappuram with 278 patients and Kannur with 246 were the districts with the highest case load. Ernakulam with 191 patients, Thrissur with 189 and Kollam and Pathanamthitta with 183 patients each also added significantly to their case load in recent days.

The total number of persons currently under COVID-19 surveillance was 1,77,759, of whom, 2,915 persons with mild COVID-like symptoms were in hospitals. The number of samples tested in the last 24 hours in the State was 7,219 and hotspots 135.

Three new deaths each occurred in Kurnool and Srikakulam districts, two deaths each in Visakhapatnam and Chittoor, and one each in Kadapa and Vizianagaram.

The death rate in Srikakulam, the only district with less than 100 cases had gone up to 6.45% following new deaths in the past day. Krishna district had a death rate of 4.05% and 68 deaths. The district had the highest death rate for a long time. The State COVID-19 death rate was 1.23%.

Karnataka reported 42 deaths, taking the toll to 335 apart from four non-COVID deaths The toll of 42 was a new daily high. While 24 of the deaths were from Bengaluru Urban, six were from Bidar, four from Dakshina Kannada, three each from Dharwad and Kalaburgi and one each from Bengaluru Rural and Hassan. Among the fatalities, 34 were cases of Influenza-like Illness and Severe Acute Respiratory Illness.

With Saturday’s numbers, Bengaluru Urban had 8,345 positive cases. The total number of discharges in the State was 9,244 with 439 more persons walking out of hospitals.

Positive case numbers had been on a steady rise since mid-June. Over 55% of the total 21,549 positive cases were reported till June. During this period, the State saw 195 deaths, which was 58.2% of the total 335 deaths. As many as 129 of the deaths are from Bengaluru alone.

After May 24, the doubling rate reduced to eight days and subsequently to an average of three days. Karnataka now stands in the 6th place in the country in terms of positive cases.

Telangana’s case total was 22,312 and the five new deaths took the toll to 288. The new cases included 1,572 from Greater Hyderabad, 92 in Rangareddy district, 53 in Medchal district and 31 in Warangal Urban. The cumulative Test Positivity Rate — percentage of samples positive — was 20.1%, the highest among States.

The number of tests will increase as at least four more private labs in Hyderabad were permitted to conduct tests. Besides, the State government too is ramping up testing capacity. So the Positivity Rate is likely to increase further.

A total of 22,312 cases were detected in the State till date making it the seventh highest across the country. Of the total, 10,487 are active cases, 11,537 were discharged and 288 patients have died.

(With inputs from Vijayawada, Bengaluru and Hyderabad bureaus)