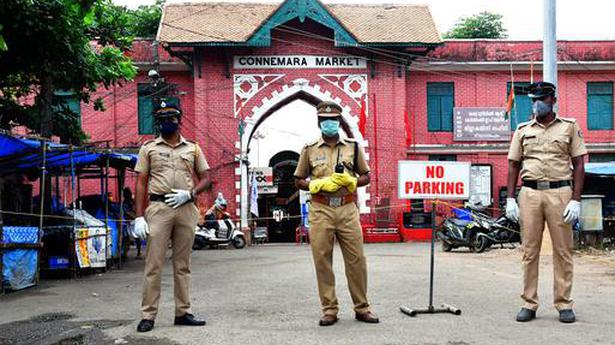 The Kerala government has imposed a stringent triple lockdown in Thiruvananthapuram city Corporation area for a week from Monday, in view of the increasing number of COVID-19 cases through contact. State Police Chief Loknath Behera said all roads leading to the city would be closed from 6 a.m. on Monday. Vehicular traffic would not be allowed in any of the city roads.

Hospitals, medical shops, and grocery shops would be allowed to function. All government offices, including the Secretariat, would remain closed. Police personnel would be deployed at all the main locations and roads.

The capital district witnessed its highest single-day spike as 27 people tested positive for SARS-CoV-2 on Sunday. Among them, 22 people contracted the infection through contact and worryingly, the sources of infection of over 10 of them were unknown.

A bulk of the fresh COVID-19 cases were reported from Manacaud, Poonthura, Attukal, and Muttathara that were declared containment zones. Enhancing the cluster formed by the diagnosis of COVID-19 in a fish merchant at Poonthura; his 18-year-old daughter; 15-year- old son; and several others, including two children, aged two and 14; five men, hailing from Muttathara and Uchakkada, and two women, hailing from Manacaud and Poonthura. Two Manacaud natives — a headload worker and a fish vendor — who works in the Kumarichantha market and two fishermen hailing from Pulluvila and Poonthura, both working at the Vizhinjam market, also tested positive.

The others include a nurse and a pharmacist at a private hospital in Attukal, a 62-year-old Vanchiyoor native who used to run a Milma booth on the East Fort-Airport road, and a 70-year-old Manacaud native who runs a tea shop on the Attukal-Manacaud road.

A 76-year-old Malayam native, who returned from Udaipur in Rajasthan, was prevented from entering his house by his relatives. On seeing the man roaming in the area, local residents alerted the panchayat officials, following which he was shifted to the corona care centre at Pankajakasthuri Ayurveda Medical College, Kattakada.

The City police booked 122 people for violating lockdown norms. They fixed a limit of 10 people for organising demonstrations.