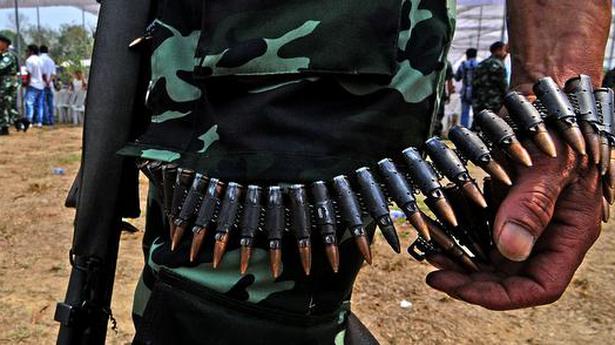 The Itanagar Bench of the Gauhati High Court has directed a former Arunachal Pradesh MLA to surrender in an abduction case allegedly involving the Isak-Muivah faction of the National Socialist Council of Nagaland, or NSCN (IM).

“…It appears that a serious crime has been committed with the motive of extortion and which could have led to further commission of other offences if it had not been intervened at the right time. It also appears that at least, at this stage; all fingers are pointed towards the accused-applicant, herein,” the court said in its order.

“Therefore, this court is of the view that the accused applicant should immediately surrender before the Judicial Magistrate first class, Longding… and apply for regular bail on the day of his appearance itself,” the court said. It directed the police not to arrest Mr. Wangham till such time.

The court also directed the former MLA not to indulge in any act that could influence the probe or tamper with evidence.

Members of the NSCN (IM) reportedly abducted BJP workers Lemphu Wangsu and Donchong Manham on April 15 and demanded ₹4 crore as ransom for them. A case was registered at the Longding police station the following day.

Both were released two days later.

The police later arrested seven people in connection with the abduction. According to the district police, some of the arrested, during interrogation, revealed that Mr. Wangham was behind the abduction.

The former MLA could not be contacted. All his numbers were switched off.

Following the court order, the BJP’s Longding district unit demanded the case be handed over either to a special investigation team of the State police or the National Investigation Agency.

Mr. Wangham, 50, was elected from the Longding-Pumao Assembly seat in the 2014 State election he contested as a People’s Party of Arunachal candidate. He contested the 2019 election as a candidate of the National People’s Party but lost to the BJP’s Tanpho Wangnaw.