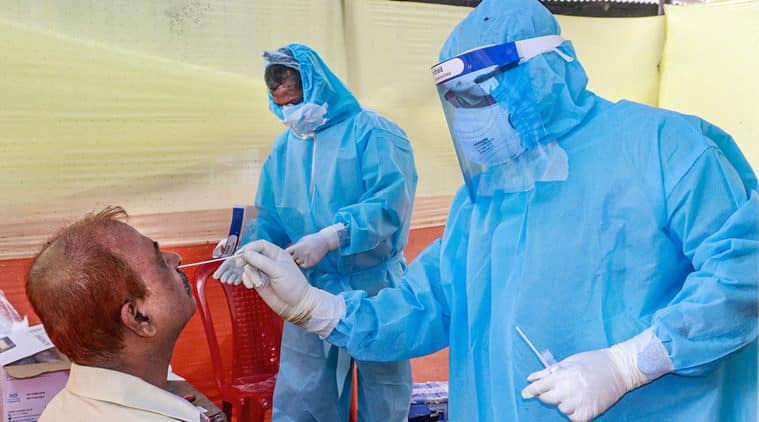 
The state has conducted over two lakh tests so far. (File/PTI)

Assam on Tuesday began a targeted surveillance program in all districts to randomly test people working in truck parking lots and unloading bays; frontline district administrative, police and health officials; and family members of those who have been released from institutional quarantine. The program aims to test over 50,000 samples in 10 days starting from June 17.

All staff, employees and labourers at truck parking lots and unloading bays including railway goods yard and godown will be screened and randomly tested under this program. Health care staff, police personnel, transport department, and administrative officials who have been on the frontline against Covid-19 will also be screened and tested. The staff of hotels — including receptionists and cleaners — which are being used by the government as quarantine centres will also be included under the program.

Assam has so far reported over 4,300 Covid cases and eight deaths. The state has conducted over two lakh tests so far. While majority of patients in the state are amongst those who have returned following the relaxation of travel restrictions, many don’t have any travel history.

In Guwahati city alone, 25 people without travel history have tested positive till last week. The city also has 80 containment zones as of now.

Along with the surveillance program, the state government has also issued strict standard operating procedures (SOPs) for different establishments related to trucks. According to health officials, it has been found that a considerable number of cases in the state are found to be connected to people associated with incoming trucks.

The elaborate guidelines include that at the truck parking lots, a detailed record of all the vehicles entering the parking will be kept and shared with the district administration. Moreover, once the trucks are parked, it has to be ensured that the driver and the handyman do not leave the premises of the parking lot, other than for loading and unloading of their trucks. At weighbridges and petrol stations, separate toilets need to be marked for drivers and handymen.

Similar measures to limit the contact of employees with the drivers and handymen have been prescribed for unloading centres and godowns as well — for instance, the management has to ensure that there are separate spaces for truckers to cook their food. Similarly, at dhabas on highways frequented by truck drivers, the government guidelines say takeaways are to be encouraged and employees should not handover food packets directly to the customers.

Previous articleKochi Muziris Biennale 2020 will open on December 12
Next articleLockdown: No buyers for Cashew in Tripura, farmers plan to shift to rubber cultivation