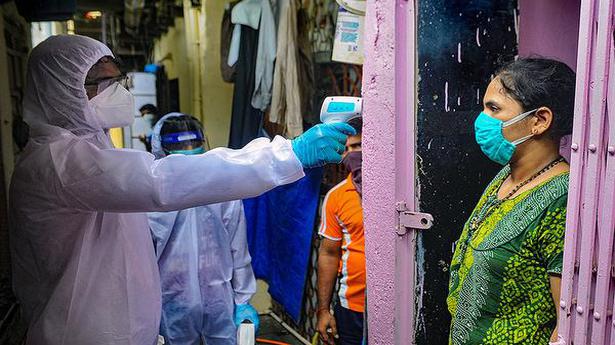 Maharashtra recorded its highest single-day surge in COVID-19 cases on Sunday, with a staggering 5,493 fresh cases taking the State’s total case tally to 1,64,626.

This is the third consecutive daily spike of more than 5,000 cases to be reported in the State, with 5,318 cases being recorded on Saturday and 5,024 cases on Friday. Of the total case tally, however, only 70,607 are active ones.

As many as 156 more deaths pushed the State’s death toll to 7,429. Of these, 60 were reported in the last 48 hours, while 96 were from an earlier period, said State Health Department officials. As many as 2,330 patients were discharged on Sunday, taking the total number of recoveries till date to 86,575.

As many as 20 deaths from Pune district saw the total death toll surge to 714, while eight from Nashik district took the latter’s COVID-19 related death count to 217.

After Mumbai, Pune district reported an alarming rise of nearly 850 — the district’s second-highest single-day surge — as its total case tally soared to 20,870, as per State Health Department figures. Of these, 9,448 are active cases, while 10,708 people have been discharged thus far.

Along with Mumbai city, most areas in the Mumbai Metropolitan Region (MMR) reported record high case surges as well.

Fresh cases continued to mount at an alarming rate in Thane, with the district reporting a record surge of more than 600 new COVID-19 cases to take the district’s total tally to 13,502.

Mira-Bhayander and Vasai-Virar in the MMR, too, witnessed sharp spikes of 114 and 288 new cases, respectively, to take their total case tallies to 3,246 and 4,206, respectively.

Nashik district in north Maharashtra reported another big spike of 199 new cases with Nashik city reporting 113 of these, while Malegaon – hitherto a virus hotbed – reporting 35 new cases after recording single-digit case surges till recently. The district’s total tally has risen to 3,902, of whom 1,622 are active.

He further said presently, 5,70,475 people across the State are in home quarantine and 37,350 are in institutional quarantine.