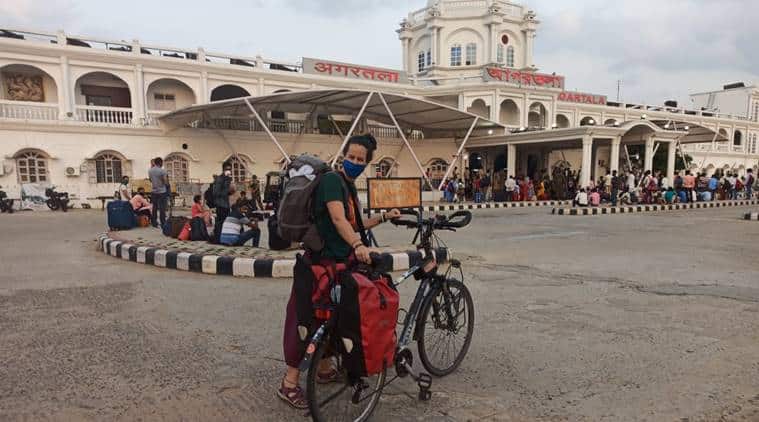 A nurse by profession from the Canary Islands, this young Spanish national is also a seasoned cross-country cyclist, and had crossed 18 countries of Europe and Asia in the last three years during her South Asia cycle tour.

Novel coronavirus was still seen only in news, and few had imagined the threat it would grow into. Yessenia was travelling through Bangladesh with plans to visit Tripura, cross over to Mizoram through Kanchanpur in the state’s northern district, and move to Myanmar. She was screened on arrival at Akhaura ICP in Agartala, where medical teams had just been deployed, with caution over Covid-19 rising. She was allowed inside since she had no flu-like symptoms.

After spending 10 days at Agartala, Yessy moved on to Kanchanpur, 160 km away, cycling for three days, where she was stopped from crossing the Tripura-Mizoram inter-state boundary and told by healthcare personnel that she needed to undergo tests at Agartala. She was taken back to the state capital, kept in a quarantine centre for 14 days, discharged and sent to a government-run youth hostel, only to be quarantined there for another 14 days.

“I was perplexed. I had no symptoms, had already spent 10 days in Tripura and there was no point of placing me under quarantine for 14 days again. But I was still placed under quarantine for two weeks. After being discharged from there, I moved to Bhagat Singh Youth Hostel in Agartala, where they set up a quarantine centre soon after. I had to stay inside like the quarantined people for another 14 days,” she told indianexpress.com.

Fluent in Spanish and English, Yessenia faced troubles communicating with most government personnel on duty, who offered help in Bengali or Hindi.

“There was so much misinformation and absolute lack of information. I am a Spanish citizen. So, I kept asking everyone where foreign nationals should go for information. It seemed no one knew anything,” she recounted.

After several days, she got in touch with a district health officer of West Tripura, who briefed her about state government instructions. With not much money in hand and next to no contacts, she turned to Father Paul Pudussery of Asha, a centre maintained by Holy Cross and Missionaries of Charity on the outskirts of the city, on a friend’s recommendation.

“This centre was initially designated to be a Covid-19 care centre. But after no one turned up, we got these people, stranded in Tripura. They joined us in our social service work of distributing masks, food, sanitisers, etc. among the needy,” Father Paul said.

At Asha, Yessenia met three other cyclists, who were en route to Tokyo to visit the Olympic Games. Their journey was cut short after they entered Tripura through Bangladesh.

“We cycled across seven states, through Kerala, Tamil Nadu, Karnataka, Andhra Pradesh, Odisha, West Bengal and Tripura, using Bangladesh as a detour. But they placed us under quarantine where no one tested us,” Haseeb Ahsan, a sales executive-turned cyclist, said. 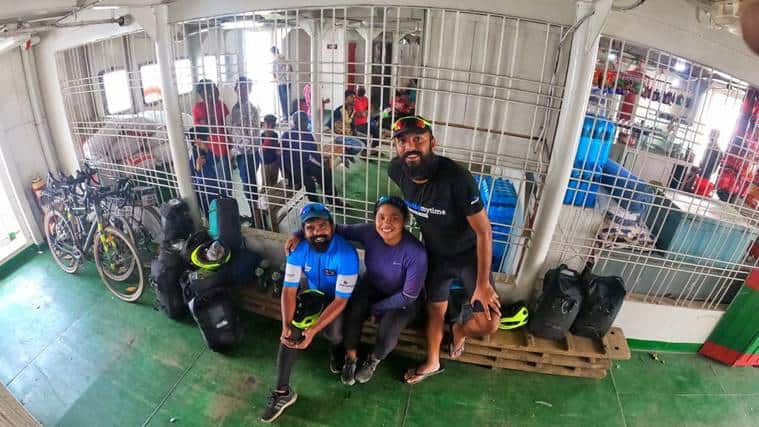 Clifin J Fancis, a mathematics teacher, and Donna Ann Jacob, a software engineer, who accompanied Haseeb in their tour to Tokyo Olympics, were stranded as well. The team was equally perplexed as Olympics were postponed till 2021 due to the pandemic.

“It’s been two months since we are here. We are lucky to have been accepted at Asha Holy Cross. We are checking for trains every day. This is a long wait to get back home,” Donna said.

All four cyclists feel the coronavirus pandemic will have lasting impact on travelers like them, since they don’t spend much for their journey.

“We don’t pay for sleeping. We carry sacks, mats, sleeping bags and other essentials and pretty much sleep anywhere we can, including at homes of kind people who open their doors for us. But with the pandemic, people might be wary of allowing foreigners to stay at their homes,” Haseeb said.

A special train left Badharghat in Agartala for Delhi on Monday evening. Yessenia boarded the train and left, with plans to board an Air India evacuation flight to Madrid on May 30. But her friends still wait for their turn.
Tripura has arranged train bookings to send back 33,000 migrant workers and other stranded people to their respective states. The move, which is estimated to cost Rs 2.50 crore to the state exchequer, is being financed from CM relief fund. Some trains have already departed for Karnataka, Bihar, Delhi, while more are scheduled to leave soon.

On the other hand, over 39,000 people of Tripura stranded elsewhere in the country, who registered with the state government’s Covid-19 helpline, are being brought back through point-to-point train service, buses, etc.