COVID-19: The 9 to 5 flower arrangement challenge 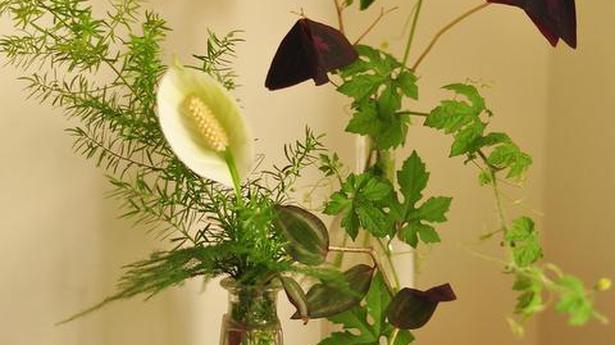 When the coronavirus lockdown was announced, and people had begun working from home, Karan Singh Parmar, had a chat with his business partner, Amit Lata. The two run Twelve Tomatoes, a company that has a flower delivery service and provides support to urban gardeners. When they were chatting, they spoke about how people with 9-to-5 jobs were missing their daily routines.

“The idea for the challenge came from there and the fact that people now had time,” says Parmar, who took to Instagram when the lockdown was announced, to launch what he thought would just be “something creative and fun”. The idea of the 9 to 5 challenge is to arrange a minimum of five and maximum of nine stems in a receptacle.

“These arrangements could be different permutations and combinations — just greens, or greens and flowers, or even fruit and vegetables, or herbs,” he says, having demoed a few options on his Instagram handle @twelvetomatoes. He didn’t expect almost 200 people to take it up — the pictures here are some of his favourites.

Happy with the outcome, he has launched the #Freakebana or ugly cool challenge, to tap into the beauty of arranging everyday objects. He’d originally used the idea for a photoshoot in Harper’s Bazaar magazine, and then for a client’s wedding, and is now waiting to see what people put out on Instagram.

“Today, flowers are a luxury, so it’s about the process of choosing when you have less,” says Parmar, who hasn’t had business for a couple of months now, but spends his time tending to his terrace garden with over 300 plants.

Previous article‘Lack of civic sense led to pandemic’: Jose Brasa
Next articleMaintaining your car during the lockdown