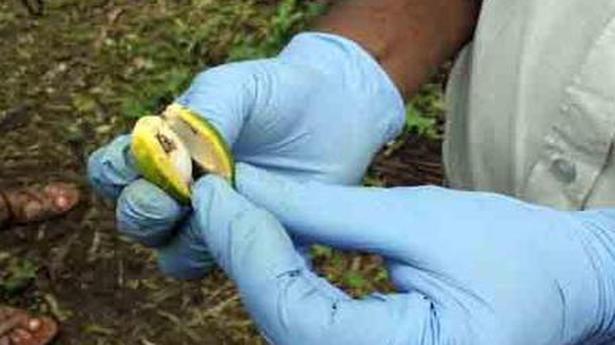 Nut dropping has hit arecanut plantations in the coastal belt on a vast scale after a gap of five years, worrying farmers. The team paid the visit on an invitation by the All India Areca Growers Association, Puttur.

The general secretary of the association, Mahesh Puchchappady, told The Hindu that the team visited plantations in Sullia, Puttur and Kadaba taluks on Friday. The scientists were from the Vitla station of the CPCRI, Kasaragod.

“The team visited 12 plantations for the sample study. According to the scientists a bug menace appears to be the reason for the nut dropping. The institute will send its report to the association by recommending the measures to be taken to control the dropping,” he said.

In addition to Mr. Puchchappady, the president of the association, Ashok Kinila, also accompanied the team to the plantations.

The incidence of green coloured tender arecanuts dropping (or nut dropping) is high in Sullia, Puttur and Bantwal taluks in Dakshina Kannada and some tracts of Udupi. The association estimates that the nut dropping could reduce the arecanut production by about 30% this year.

The general secretary said that normally some amount of nut dropping is common in arecanut plantations. Though it has been attributed to variations in weather conditions the association wants agriculture scientists to find out the exact reason and why it aggravates in some years. “Like the loss due to ‘kole roga’ (fruit rot disease), nut dropping also results in huge loss to farmers, especially small and marginal ones. The association wants farm scientists to suggest how it can be prevented or controlled.”

Previous articleThe Best Smartphones You Can Buy Under Rs. 20,000 [July 2020 Edition]
Next articleImprove your workout with the weighted vest