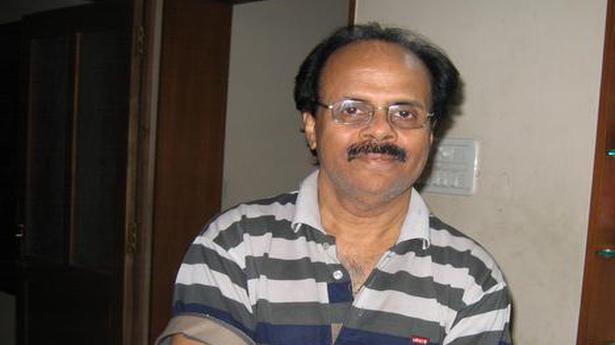 It is a year, June 10 to be precise, since the king of humour, Crazy Mohan passed away. Memories came flooding — about him, his plays and this writer’s interaction with him. I had called him to try and set up a meeting with him for the young drawing artiste S Prahladh (https://www.thehindu.com/todays-paper/tp-features/tp-fridayreview/passion-beyond-his-years/article31587244.ece). After having seen a few of the boy’s drawings, he wanted to mentor the boy. But the meeting never happened as Mohan passed away suddenly.

It was his evening trip to Marundeeswarar temple in Tiruvanmiyur to meet his close friend and mentor S Ravi that turned out to be a defining moment in Rangachari Mohan’s life. It was then that he started writing the script for his first play. Played out to a packed audience at Mylapore Fine Arts in 1974, ‘Crazy Thieves in Palavakkam’ turned out to be a sensational hit and shot Mohan into limelight. ‘Crazy’ too stuck to him all his life.

She was the one, who spotted the six-year old’s talent for drama and chose him for the role of Veera Pandiya Kattabomman in the school annual function. She taught him the dialogue and his performance was outstanding. In return, Mohan named every heroine of his play as Janaki.

It was a pack of dogs, which literally drove Mohan out of his corporate job. After his late night duty at Sundaram Clayton, Mohan would ride back on his Lambretta all the way from the factory in Padi to his house in Mylapore. From Gemini Flyover and right through to TTK Road, a few dogs would chase him every night. They could literally pick up the splutter of lamby as it crossed the MG Road. Mohan had a phobia for dogs and having to ride the two-wheeler with feet up proved too much of a torture.

‘She’ is the groom

Mohan had penned the story for Kathadi Ramamurthy’s popular hit ‘Ayya Amma Ammamma.’ Buoyed by its success, the owners of Kumudam wanted them to present it in their auditorium. Since women were not allowed inside Kumudam premises in those days, Crazy Mohan donned the role of ‘Janaki’ in that play that day. It was also the time Mohan’s engagement was being planned with Kumudam Parthasarathy’s niece. Instead of Mohan and his family formally ‘seeing the girl,’ Parthasarathy and his family saw the prospective groom as a woman. Parthasarathy would later introduce Mohan to the audience thus: . “This ‘Janaki’ is our ‘Mapillai.’”

It was a chance meeting with Kamal Hassan at the St Mary’s Road cemetery that sowed the seeds for the script of Apoorva Sagodarargal. Two days later, the agreement had been signed for the film with Mohan as the script writer. “When I present dramas, Kamal is my Visiting Card. For my overseas programmes, he is my Visa. And the common chord between us is ‘Humour,’’’ Mohan once told this writer on his three-decade association with Kamal.