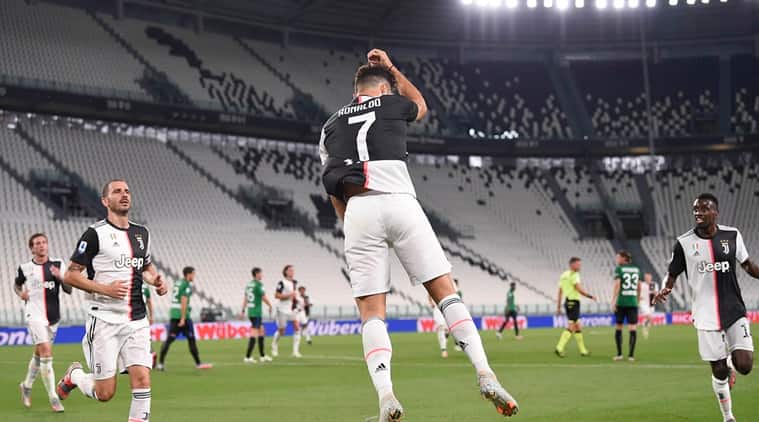 Cristiano Ronaldo converted two penalties, both awarded for handballs and the second in the last minute, as Serie A leader Juventus twice hit back to draw 2-2 with Atalanta to move closer to a ninth successive Serie A title on Saturday.

The Portuguese forward took his league tally to 28 goals this season as Juventus went eight points clear of second-placed Lazio with six matches to play. Atalanta are a further point back in third after being denied a tenth successive league win.

Both handballs were clearly accidental but, under the current rules, referee Piero Giacomelli had no option but to award the penalties.

It was rough justice on Atalanta. The team, which leads Serie A in scoring, would have climbed into second place and cut the gap between themselves and Juventus to six points if they had won.

Juventus, humbled 4-2 at AC Milan on Tuesday, dropped Miralem Pjanic but were quickly forced onto the back foot by a typically audacious Atalanta side.

Duvan Zapata put the visitors ahead in the 16th minute as an intricate exchange of passes with Alejandro Gomez opened up the Juventus defence before the Colombian slotted his shot past Wojciech Szczesny.

The visitors continued to pen Juventus into their half, enjoying 58% possession and five shots to the home team’s one before halftime, only to fall foul of the handball rule 10 minutes after the break.

Paulo Dybala fired a cross against Marten de Roon’s elbow and, although it was at point-blank range and the Dutchman’s arm was close to his chest, the referee immediately pointed to the penalty spot.

Ronaldo smashed home the spot kick, scoring for the sixth game in a row.

The game opened up, with Atalanta regaining the lead in the 81st minute when Luis Muriel sent a pass across the face of the penalty area to Ruslan Malinovskyi who took it in his stride before firing a right-foot shot past Szczesny.

But lightning struck a second time for Atalanta when Gonzalo Higuain got his foot to a corner and deflected the ball onto Muriel’s hand.

The Colombian did not have time to get his hand out of the way but, as it was outstretched, the penalty had to be given and Ronaldo converted in the 90th minute.

Second-placed Lazio slumped to a third successive defeat in the Serie A title race when they were beaten 2-1 at home by midtable Sassuolo in stifling heat at the Stadio Olimpico on Saturday.

Halftime substitute Francesco Caputo headed in from point-blank range in stoppage time as the visitors hit back after trailing at halftime.

Lazio remained stuck on 68 points, seven behind Juventus who were at home to third-placed Atalanta (66 points) later on Saturday. Sassuolo are eighth with 46 after their fourth successive win.

It was another subdued performance by Lazio who were on a 21-match unbeaten league run and one point behind Juve when Serie A was suspended by the novel coronavirus pandemic in March.

Their injury-plagued squad has lacked the strength-in-depth to contend with a hectic fixture list and they have lost four out of six games since the restart.

“We need to get some more points and claim our title, which is a place in the Champions League,” said Lazio coach Simone Inzaghi. “It’s rash to talk about the (Serie A) title now, whereas before the stoppage we said we would believe in it until the end.”

Giacomo Raspadori, making his first-ever Serie A start, had the ball in the net for Sassuolo after nine minutes but the goal was ruled out after a long VAR review.

Replays suggested that the ball was played to Raspadori by Lazio midfielder Marco Parolo as he tackled Mehdi Bourabia and the referee appeared to rule that Parolo’s touch was accidental.

Lazio had another letoff two minutes later as Filip Djuricic hit the crossbar.

But they took the lead in the 33rd minute when Manuel Lazzari found the energy to run half the length of the pitch and cross to Luis Alberto who, after a heavy first touch, managed to score despite Manuel Locatelli’s challenge.

Sassuolo replied seven minutes after the restart when Caputo got free on the right, rolled the ball to Raspadori and the 20-year-old was this time able to celebrate his first Serie A goal.

Serie A’s leading scorer Ciro Immobile curled one wide and Bastos headed over as Lazio rallied, only to suffer a knockout blow.

The ball was swung in from the left, Gian Marco Ferrari got up at the far post and headed the ball across goal for Caputo to nod into the net.