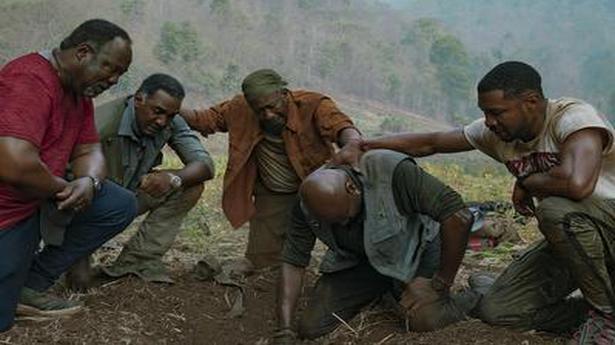 Spike Lee is restive, indignant, unsparing and implacable and all of it reflects with a sense of urgency and topicality in Da 5 Bloods. The portrayal of African-American experience has always been integral to Lee’s cinema. When it comes to his latest work, unlike the wildly entertaining look at racial relations, in his previous outing BlackKklansman, Da 5 Bloods is framed ambitiously and sombrely in the history and the present, the real as well as the imagined.

Their story is bookended by documentary footage and news clips in the prologue and a wrap up in the end that contextualises the war in terms of the civil rights issues and links it up well for the audience with George Floyd’s murder and the Black Lives Matter movement. The anti-Vietnam war speeches of Mohammad Ali (”They never called me a n*****”) and Malcolm X and the iconic images and video footage of the atrocities from the Vietnam war set things rolling, and the recording of an address by another strident critic of the war Martin Luther King Jr at Memphis Tenessee caps it in the end. The history of violence by the “big and powerful” America is seen as unifying and also in continuum. The injustices done to the African-Americans in the USA get seen in perspective, with the cruelties unleashed by it in Vietnam. It’s almost like witnessing the formation of solidarities on the screen.

In the middle there is a sprawling, at times overly plodding tale of brotherhood, lost love and families, of “bastard children of the enemy” dismissed as “cockroaches”, of reconciliation with a son. There is also the thread of bounty hunters, gold diggers, greed, French agent, tax free accounts in Macau and of course the constant flashbacks to the battleground of the past and the remains of the war that continue to haunt the present.

There is also the classic tale of betrayal, crime, punishment and redemption. All of it might make the narrative meander along but also gives it an emotional heft along the way, specially so with Paul’s crazed, moving soliloquy in the thick of the jungle: “You will not kill Paul… I will choose how and why I will die”. Can he really exercise a choice?

If it’s Lee, sharp satire can’t be entirely wished away either and he does take on a lot, be it the French in World War II or Hollywood’s Ramboesque representation of war in which the foot soldiers, the true heroes get erased: 11 per cent of the US population was African-American while they formed 32 per cent of the troupes in Vietnam. Whose war were they fighting? What were they fighting for? What did it bring them? There is the irony of the soldiers of the two countries linking across the divide of the battle lines even as the McDonalds and Pizza Hut carry on with diplomacy of another kind. Aren’t they the better weapons of mass destruction?

And Lee can’t resist reserving the best potshots for the bete noire, Agent Orange as he is known to call president Donald Trump. Fake bone spurs, the illusion (rather delusion) of Blacks for Trump: there is much sharpness to relish as he takes on the “Klansman in Oval Office” or the “Reality TV President”.

Lee ties up all the loose ends and leaves on a note of hope which may feel unreal, but is also equally cathartic in the midst of despair as one sees pictures pouring in of the thousands gathered on Friday at the Black Lives Matter march in Seattle. Clearly, wars never end. They only shift shape.