Damaged in floods, these bridges are still hanging fire 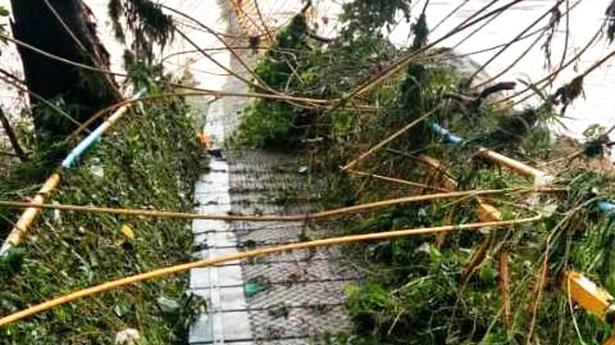 The devastating floods which hit several parts of the State in the last rainy season either damaged or washed away at least eight suspension or hanging bridges built by ‘bridge man’ Girish Bharadwaj for rural connectivity. Nearly a year after the havoc, the government has restored none of them. Hopes have been raised to restore only two bridges as the government had approved funds, some months ago, for their reconstruction.

The damaged bridges were at Dongri, Ramanaguli and Bangane in Uttara Kannada, Mugeradkka in Dakshina Kannada, Khandya in Chikkamagaluru, Modaga, Ramadurga and Ghodageri-Avaragola in Belagavi. Huge trees and debris washed up by the rivers got stuck on the bridges, leading to heavy oscillation, damaging the structures.

Of them, the State government has approved funds to reconstruct the ones at Khandya and Dongri, Mr. Bharadwaj, who lives in Sullia in Dakshina Kannada, told The Hindu. “The design for the bridge at Khandya across the Bhadra is ready and the one for building at Dongri across the Gangavali is yet to be prepared,” he, who has been awarded the Padma Shri for rural connectivity by building low cost and eco-friendly bridges, said. The bridge at Khandya connected Khandya with Balegadde. Harish Balegadde, a resident, told The Hindu that the bridge reduced the distance between Balegadde and Khandya from about 10 km to 1 km.

“In its absence now we have to take a detour of 20 km (two ways) to frequent between Khandya and Balegadde by a road which passes through a deep forest on an uncomfortable terrain,” he said. “We can’t explain the hardship we have been facing ever since we lost the bridge,” he added.

“There is always the threat of wild elephants and other animals on this road,” said Mr. Bharadwaj. Mr. Balegadde said that now the Public Works Department has sanctioned ₹3.5 crore to re-build the bridge. In its absence, the government made a boat service to cross the Bhadra which can carry only eight persons at a time.

Sanjeeva Matandor, MLA, Puttur, said that the bridge across the Netravathi at Mugeraddka, near Uppinangady, will be rebuilt. The file for sanctioning funds which with the Revenue Department is held up due to the lockdown since March. This bridge connected Mugeraddka with the Mangaluru-Bengaluru National Highway 75 at Valalu. Without this bridge people have been forced to take a detour of about 18 km to reach Uppinangady. With the bridge Uppinangady was about 5 km away from Mugeradkka.

Mr. Bharadwaj said that the bridge across Ghataprabha connecting Ghodageri with Avaragola in Hukkeri taluk which was 290 metres in length was the longest among 138 hanging bridges built by him in the country. He heard that it may not be rebuilt as there is a bridge-cum-barrage at some distance from the damaged hanging bridge. He said that he is not aware of the government’s plans about restoring other bridges. He added that the bridges to which funds have been approved could be restored only after this rainy season ended.