Dancers explore the concept of home 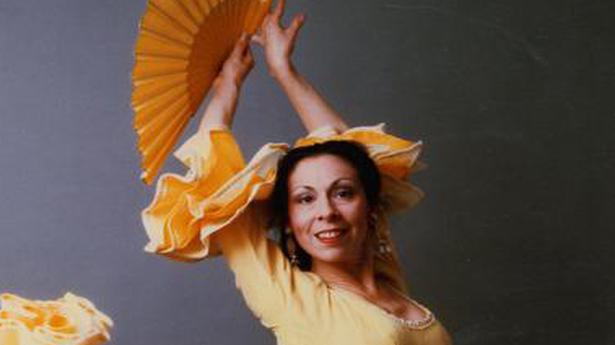 The word, ‘home’ evokes a flood of emotions, memories, spaces of comfort and loved ones. In the edition of ‘Home Sketches’ by Aalaap, Ramya Ramnarayan along with the Flamenco artiste Lisa Botalico explored home, in all its aspects. “Home is a place where I exist as an artiste,” declared Ramya, adding, “It’s a part of a community of artistes, where each has left their imprints.” The petrichor after summer showers, sabha hopping during the Marghazhi season and the heritage we carry forward in our lives would be home for her.

Ramya presented two pieces based on Goddess Kamakshi as an ode to Kanchipuram, the temple town of history and heritage. Opening with verses from the ‘Soundarya Lahari’ (Adi Sankara), this piece humanised Parvathi as she made her journey through life and its kaleidoscope of emotions. “For me, home is a place filled with unforgettable memories, bursting with excitement. A place with emotional sharing and giving,” she explained. Ramya’s artistic journey has been peppered with unforgettable experiences alongside legendary Gurus.

She began learning adavus from Adyar K Lakshman when she was four years old and later spent a year with Chitra Visweswaran, before embarking on her journey with Guru Swamimalai S.K. Rajarathnam Pillai for many years. At age 11, her training with the late Kalanidhi Narayanan started. “This has given so much depth, which I hadn’t realised as a young student. Both Kalanidhi maami’s classes and vadiyaar’s classes were private lessons all through the years of training, which is literally a luxury for students of Bharatanatyam to gain in today’s environment.”

Muthuswami Dikshitar’s kriti, ‘Kanchadalayadakshi,’ was demonstrated with a romantic narrative. Kamakshi near the Ganges, creates a linga with mud to offer prayers. In a bid to test her, Lord Siva lets river Vegavati flow in full force. Upon seeing the region flooding, she embraces the linga only to realise that it is Siva himself, appearing in front of her and asking her hand in marriage. “I got to study with different gurus training in Carnatic music and spent a good number of years having advanced training with the veteran R. Vedavalli. Without prompting, she would go into the theoretical aspects, including what was appropriate for Bharatanatyam. She would talk about padams and javalis, while she would teach varnams and kritis in typical Carnatic style. These were unforeseen gifts, which I received through my life, she said as she recollected.

Separated from one she loved, a Virahotkanthita nayika, took centre stage in the Kshetrayya padam that followed. Shaken by her emotional journey and pondering, the nayika asks with a deep sense of anguish, “There was a time when my lover was with me, all the time. He used to lie on my lap, lean on my garment — not a single moment he would blink his eyelid, but continually gaze at me. Even when the time came for the sunset, he’d call for a lamp to gaze at my illuminated self. How come I’ve lost this?”

The poignant sorrow of the nayika segued into the second segment of the evening, where the Flamenco artist Lisa Bottalico presented an upbeat and lively piece — one of a lover who expresses his love and devotion for his partner. A presentation rooted in the rumba style of Flamenco, Lisa explained how multi-cultural influences had been incorporated into the art form, thereby giving it an Afro-Caribbean feel as well.

A contrast to the Kshetrayya padam, the next number was a duet between Ramya and Lisa as they presented Zorongo by the Spanish poet Federico García Lorca. ‘La luna es un pozo chico, Las flores no valen nada,’ (the moon is a shallow well, the flowers aren’t worth anything), went the lines as Lisa vocalised the poem and drove the rhythm of the song, while through abhinaya Ramya captured the longing for an embrace the protagonist felt. “It’s gratifying that this kind of organic outcome came about, because we spent an enormous amount of time in collaboration, without having an agenda — understanding each other’s work as an artiste and how we could bring about the marriage of Flamenco and Bharatanatyam,” explained Ramya.

A jugalbandi followed as Ramya and Lisa improvised rhythmic patterns in Bharatanatyam and Flamenco respectively. Across different spaces and time, the sounds of ‘takita tham tarikita tham tarikita’ echoed in their artistic interpretation. They also showcased a section of the famous Dhanasree Thillana, the music set in an instrumental version.

Modern adaptations of Flamenco display faint roots of the Kathak tradition, but not necessarily Bharatanatyam. In fact, the Spanish dance form has multicultural connections to several art forms. “The Flamenco tradition we see today embraces cultural influences and incorporates it into its routine. A living art form, it still maintains its traditional vibrancy,” said Lisa. “The audience can see how there’s the same kind of musicality in these forms and how human emotions are beyond the boundaries we draw for ourselves. That is why the padams and javalis that I studied with Kalanidhi maami is the most valuable takeaway I have as a Bharatanatyam dancer,” supplied Ramya, who considers New Jersey her home as well.

“The people may not express exactly the sentiments or have the same cultural behaviour that I do. Yet we share similar emotions and it doesn’t matter what ethnic or cultural background one comes from, humans are humans and emotions are deep and rooted in us,” summed up Ramya.

Previous article‘Crazy’ memories
Next articleMoney, after all, is not a bad word