Discrepancies in corona tests and data from private labs 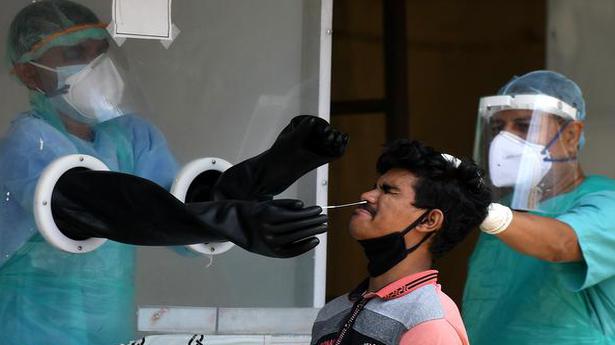 Top health officials of Telangana have said that they did not take stringent action against the 13 private laboratories in Hyderabad where coronavirus tests were conducted and discrepancies had shown up in results so that people who want to avail their services were not deprived. The names of the labs were not disclosed.

A few of the discrepancies reported were violations in quality controls, high Test Positivity Rate of around 72% in some labs, violations in the way pool sampling was conducted, variations in data — on number of samples tested and cases detected — submitted to Indian Council of Medical Research (ICMR), State portals and the lab registers.

State’s Director of Public Health (DPH) G. Srinivasa Rao said that they gave notices to 13 labs. “Most of them have rectified their mistakes and the remaining are in the process of rectifying,” Dr. Rao said at a press conference held at Command Control Centre in State Health Campus on Saturday.

When asked how would they validate if there have been any false positives and false negatives during these tests at the private labs, the question was left unanswered at the press conference.

Around 10 days after the State government officials permitted private labs in the State to conduct coronavirus tests, the DPH stated in the daily medical bulletin on June 25 that they have observed serious abnormalities in COVID-19 test results uploaded by private labs.

Four teams of microbiologists and senior officials inspected 16 private labs in Hyderabad where they checked various aspects such as infection control measures, infrastructure, human resources, and others such as general hygiene.

A report on the inspections was submitted which was examined by an Expert Committee of Microbiology professors along with senior officials from the Health department. Major findings of the report was published in the medical bulletin on June 26.

The Committee suspected that a few labs did not follow correct procedure in conducting pooled samples tests.

To augment the number of samples tested for the purpose of surveillance, ICMR issued an advisory according to which five samples can be pooled for tests when prevalence rate of infection is low.

Some more ‘major findings’ mentioned in the report are that there was clear evidence that staff conducting tests in some labs have not been trained properly in RTPCR testing for COVID-19.

“Measures for quality control and validation of tests were not followed in some of the labs. Lack of safety measures: Staff were not wearing personal protective equipment (PPE), safety cabinets were not available,” were some of the major findings in the report. An expert committee was supposed to conduct further inspections.

On Saturday, Dr. Rao said that a private laboratory in Himayatnagar reported a Positivity Rate of around 72% which is high while it is not more than 25% in government labs. The data from the lab is kept under abeyance.

The senior health official said that they will not hesitate to shut down the labs if the issues or abnormalities in the reporting are not rectified.

State’s Director of Medical Education K. Ramesh Reddy said at the press conference that their expert committee is evaluating the issue which will help in deciding which data is accurate.