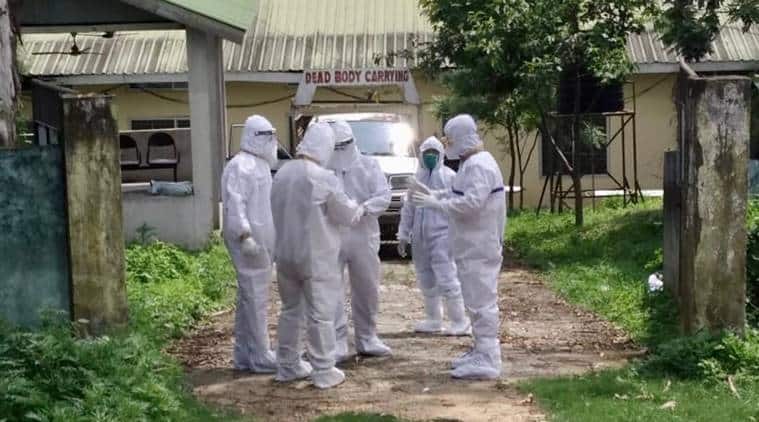 Almost 40 hours after a 58-year-old man died of Covid-19 in Assam’s Karbi Anglong district, his final rites were completed Tuesday, with the district’s police chief playing a major role in ensuring the rituals take place.

The man, who used to work in Chennai as the assistant to a school cook, returned to his native village in May. According to a local source, he tested negative when in quarantine, and then was sent for home quarantine. He later fell ill and died en route to the Diphu Medical College and Hospital on June 7 evening, with his sample testing positive for the coronavirus after his death.

He was the fifth person infected with Covid to die in Assam — and the first in the district. It was finally agreed upon to bury the body at the deceased’s ancestral village on Tuesday (Courtesy: Assam police)

As authorities completed the post-mortem and other formalities, they planned to cremate the body at a location in Diphu, the district headquarters, on June 8. However, according to officials and local residents, there was opposition from people of the area.

A senior district official said that an “unfounded fear” and “panic” had gripped the residents of the area who did not want the cremation to be held there.

When health workers and support staff members were not coming forward to transport the body from the hospital morgue, Karbi Anglong SP Debojit Deuri donned a PPE suit and did the needful.

It was finally agreed upon to bury the body at the deceased’s ancestral village on Tuesday. Karbi Anglong Autonomous Council (KAAC) chief executive member Tuliram Ronghang told The Indian Express, “There was a minor problem and then we shifted the location. Now, everything has been done smoothly.”

A neighbour of the deceased told The Indian Express that the body was finally buried near a cremation ground in Bakalia. “They dug a very deep pit to put the body in. One or two of his relatives were also present,” he said. He added that the person is survived by his wife and two daughters who are married, and that the family is financially constrained.

Later, Assam Police tweeted photos of Deuri and his guards completing the last rites, with a message that the policemen “went way beyond the call of duty”. The official Government of Assam Twitter handle commented: “Duty served with a hint of compassion!”

Deuri, however, refused to take all the praise, telling The Indian Express that it was a joint effort by the district administration, the Karbi Anglong Autonomous Council, police and Health Department officials. “He died on June 7 and it was already June 9… One-and-a-half days had passed since the death. We could not have abandoned the dead man. Someone had to take the responsibility,” he said.

District Collector Mukul Saikia was all praise for Deuri’s leadership and said that he had taken “an active role” in completing the last rites.