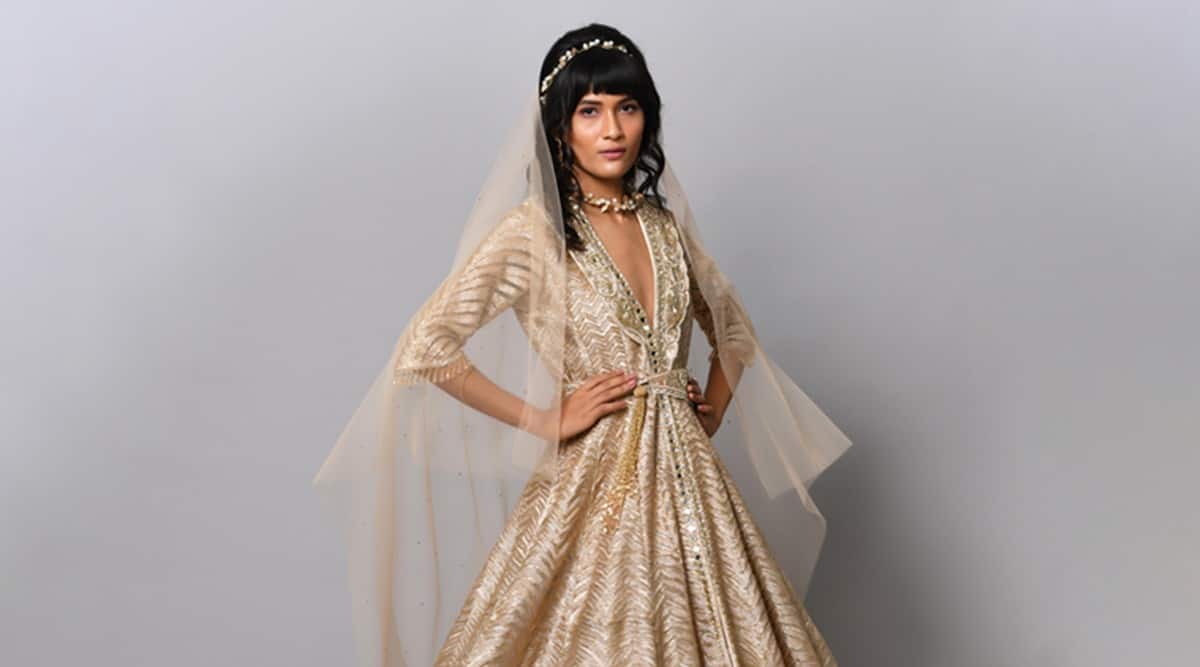 
The closing act of the day was by Suneet Varma, who presented #SVTimeless. (Source: Suneet Varma)

It was to the chant of ‘My Name is Love’ being recited by Navkirat Sodhi, that designer Gaurav Gupta unveiled his eponymous collection at the first-ever ‘digital avatar’ of the India Couture Week(ICW), which started Friday evening. The ten minute showcase was streamed across multiple social media platforms, courtesy the FDCI (Fashion Design Council of India).

The Delhi-based designer showcased his favoured classic silhouettes, blending structure and form to create a collection of gowns, dresses, saree gowns and pantsuits. But the clothes, though brilliantly crafted, played second fiddle to the models and their stories, which took centre stage at Gupta’s show. Gupta chose to showcase his work on a diverse set of models, who defied convention. Right from Anjali Lama, India’s first ever trans-female model to Anjali and Manauti, a young lesbian couple and Rudra and Anurag, a free gay couple who hail from Rajasthan and Uttar Pradesh. “We wanted to dive into into this new young pulse of India. I am calling this a movement. We have been reflecting a lot on this, and especially what the whole world is facing right now. Love for each other, love for self — love comes in all shapes, We can love all sorts of relationships. It’s a very inclusive campaign — love between men, women, or love how confident a female-trans model can be,” shares Gupta. 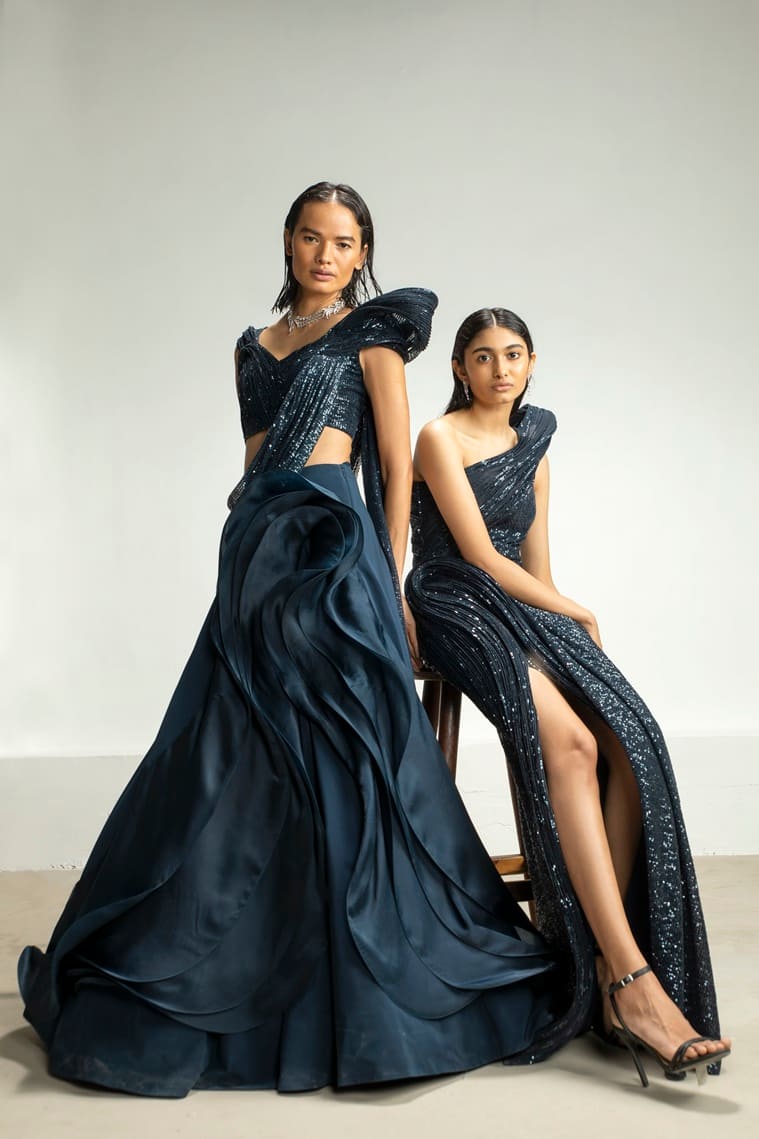 Gaurav Gupta chose to showcase his work on a diverse set of models, who defied convention. (Source: Gaurav Gupta)

The first ever digital version of the ICW had been in the works since late May of this year. “We had to do something. a digital fashion week seemed like a good way to jump start things again. While the show is virtual, the work gone into creating this is very much physical. There had to be creation of new employment and revenue. While yes, a physical fashion week also employed many people, we have tried and fill that void — there are dedicated videographers, people who organise shoots and create a viable show, but away from the ramp,” shares Sunil Sethi, President, FDCI.

The ICW is a six-day affair, which concludes on Wednesday. The lineup this time include Couture Week favourites Falguni and Shane Peacock, Amit Aggarwal and Anju Modi. Mumbai-boy Kunal Rawal too will showcase his work at the ICW. The closing act of the day was by Suneet Varma, who presented #SVTimeless. The showcase was typical Varma and it delivered on the promised bling quotient. Lehengas and sarees in bright yellow, orange, sublime baby pink and gold dominated the collection. Tulle, sequins and embroidery provided the drama quotient necessary for a couture outfit. Varma’s love for tiaras was well manifested in the collection. 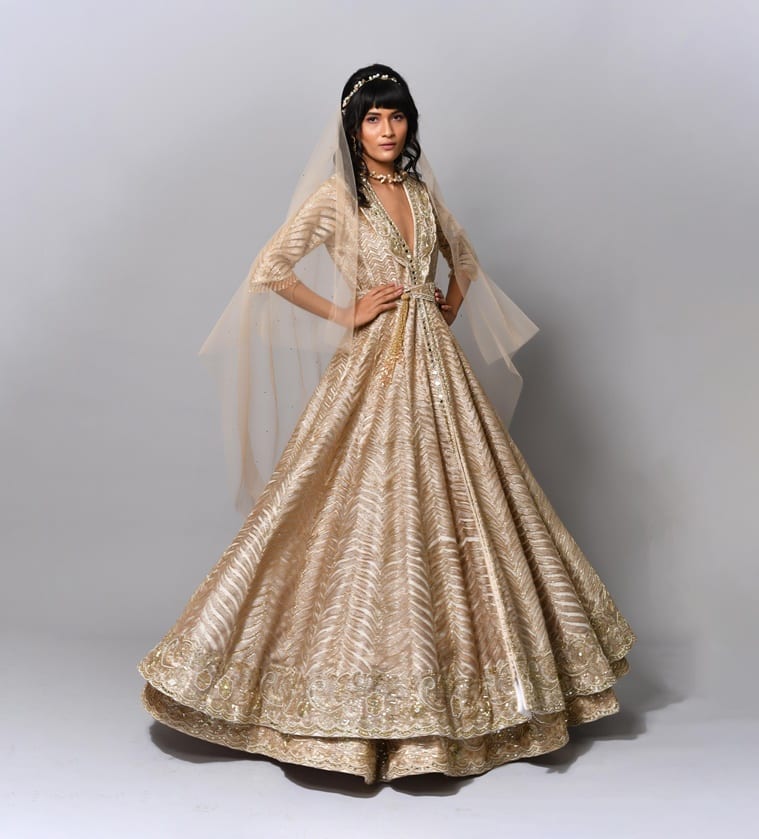 The showcase was typical Varma and it delivered on the promised bling quotient. (Source: Suneet Varma)

The digital avatar of the ICW is reflecting a global trend of fashion going virtual. Ever since the Covid pandemic made international news, most international fashion houses suspended their physical shows. Many fashion weeks like Men’s Milan Fashion Week, and Paris Fashion Week took place virtually. Dolce and Gabbana (D&G) were one of the first luxury houses to have a physical show in July, at the Milan Fashion Week earlier this year. The move by D & G was criticised by many in the fashion fraternity. The New York Fashion Week which concluded on Wednesday, had a new ‘socially distant’ version. Designers like Christian Siriano, put up a show in his backyard, with people viewing it from the poolside and Jason Wu put together a show atop the roof of a studio in Manhattan — the chairs were strategically distant. Designer duo Mark Badgley and James Mischka who turned to ‘travel’ for inspiration shot a video for their ‘travel’ inspired collection in a public garden Westbury Park.

India has roughly five main fashion weeks, and there are many subsidiary ones which are conducted by various publications. But from the looks of it, they are all headed for a digital version.

Our male celebrities are embracing the print-on-print trend more than before. What makes this trend a hit? Fashion experts reveal. fashion-and-trends Updated: Jul 14,...
Read more