E-payment for liquor sales only by September 30, Tasmac tells SC 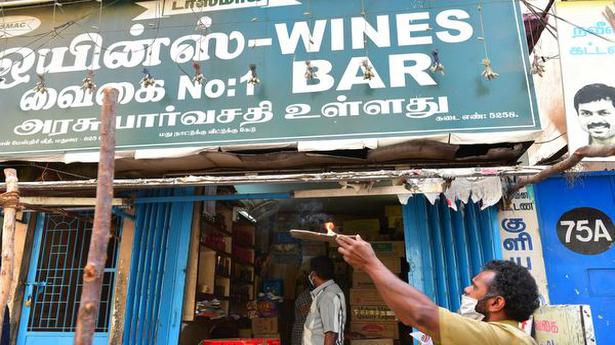 The Tamil Nadu State Marketing Corporation (Tasmac), the government-run retail liquor vending entity, informed the Supreme Court on Friday that it could complete installation of point-of-sale machines and facilitation of electronic payment only by September 30.

In a 78-page affidavit, Tasmac managing director R. Kirlosh Kumar said the online payment facility through the point-of-sale machines are available only in 850 of the 5,338 shops. That is, approximately 16% throughout the State. They are mostly located in the Chennai region. Digital payment systems are available only in 58 shops, only 1% of the total.

However, the affidavit said the crowds in front of the shops had “reduced considerably”. The volume of sales had also come down. “For the month of June 2020, the fall in the volume of sales for Indian Made Foreign Spirits (IMFS) is (-)8 percent and in the case of beer it is (-) 44 percent, as compared to the volume of sales during June 2019,” it said.

The affidavit said the switch to digital payment could not be done overnight. Extensive arrangements had to be made. The Tasmac said it had called for a sealed tender from scheduled commercial banks/systems providers for supply and installation of point-of-sale machines and facilitation of various electronic modes of payment like debit card powered by Rupay, Unified Payment Interface (UPI)(BHIM-UPI) and UPI Quick Response Code (UPI QR Code) (BHIM-UPI QR Code). However, the submission process was delayed by the lockdown. The dates had to be extended till June 8.

“The tenders were received on June 8 and seven entities had participated. The scrutiny of the tender documents is under progress. TASMAC has to follow the tender process for selecting the service provider… In the current circumstances, Tasmac will require time till September 30 to complete installation of point-of-sale machines and facilitation of various electronic modes of payment,” it said.

Meanwhile, it briefed the court about the safety precautions taken for the benefits of its employees, workers and customers.

On June 12, the court left it to the State government to decide the legal modalities and frame guidelines for online sales of liquor. Senior advocate Mukul Rohatgi, Additional Advocate-General Balaji Srinivasan and advocate Yogesh Kanna, for the State, had submitted that 90% of the shops were open with safeguards in place.

A Bench, led by Justice Ashok Bhushan, had asked the State to file its affidavit in three weeks, listing the steps taken after the court’s interim order permitting sales. The court had orally disagreed with the submissions that the Madras High Court should hear the issue.

On May 15, the court ordered an interim stay on a Madras High Court order of May 8 to close liquor shops with immediate effect to maintain physical distancing till the lockdown was lifted or modified.